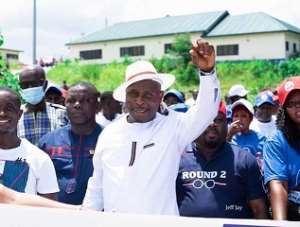 Paul Amaning, the Eastern Region New Patriotic Party (NPP) Vice Chairman hopeful is urging delegates and members of the party in the Eastern Region to seek a change in its leadership so they could break the 8-year electoral cycle.

According to him, the party given the accomplishment of President Akufo-Addo government can retain political power in 2024, if the right leadership is elected into office.

He asserts that the party’s limitation for success is the current leadership, particularly the Chairmanship position in the Eastern Region.

Clarifying this in an interview with Accra-based Kingdom FM, Mr. Paul Amaning said the party in its current state, though efficient, is not effective to sustain the efforts being taken to retain political power in 2024 and beyond.

“NPP is efficient now but it’s not effective. Being efficient is not enough for me. It needs to be effective,” he said.

He continued that the political season demands a new leader to drive the change the party desires.

“The party needs a breath of fresh air. Every season has its leader. We want to break the eight, and the government has done enormously well. We have a good message, but we need to change the messengers,” he noted.

Mr. Paul Amaning affirmed his respect for the incumbent NPP Eastern Regional Chairman, and the party, adding that he will in no circumstance denigrate him or any other contender because of the contest.

He believes the incumbent has played his part, yet the challenge that lies ahead requires a new breed of leadership to steer the affairs of the party.

Paul Amaning emphasised that his political mantra assures an “inclusive and sustainable collaboration between party and the government.”