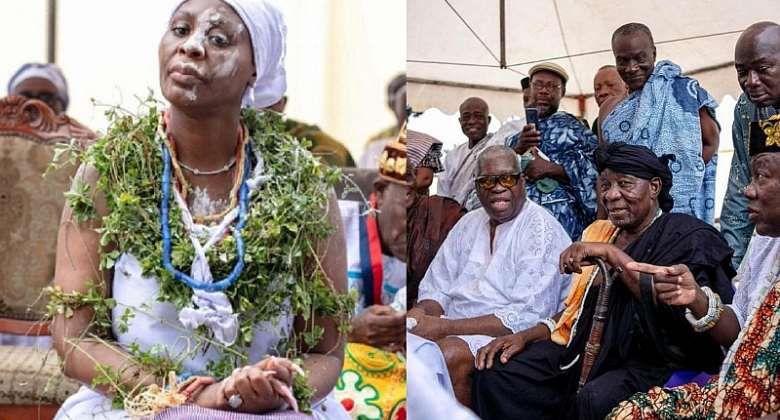 “Where there are no women, there is no home”. Mamaga Abui Buiekpor, Mamaga of Anlo, a royal by all standards from the Loafe Clan and married from the Tovie Clan of Anlo. Hence, her successor comes from the Tovie clan. The royalty originated from her as a distinguished person, who was a very gallant woman and sacrificed for a lot of people and for generations. Her generosity is incomparable and she happened to be a sister to Togbiga Wenya, Dutor of Anlo.

The Tovie clan is one of the fifteen clans of Anlo with its members living in many towns and villages near and afar. The clan has a Buffalo as their totem. Their greatest taboo is never to kill or eat the flesh of a buffalo. And a person who violates this will result in his or her demise. The clan’s gods/cults are Mala and Kotsi. And the clan is noted to have several stool houses in the Anlo land.

The role of Mamaga is to marshal the rest of the “Mamawo” of Anlo towards developmental issues and building great society without leaving any woman behind. And to succeed Mamaga Abui Buiekpor, you have to be a descendant of the Tovie clan like our current Mamaga Abui Buiekpor II, Mamaga of Anlo. Mamaga Abui Buiekpor II is well informed on the tradition and customs of the Anlos. And took part in many traditional activities held by the Tovie clan and those that involved her in the past as custom and situations demanded. The youths of Anlo when are we going to protect our own and be happy for our own?

Mamaga Abui Buiekpor II, is a Ghanaian London based business woman, entrepreneur and philanthropist. She loves her people and does not discriminate irrespective of your gender, beliefs or understanding. And will work easily with people from diverse societies. In the past, her hard work and generosity made her to be loved by many and given many other developmental titles. Which in no way conflict with her current status as the Mamaga Abui Buiekpor II, Mamaga of Anlo.

For the records, you can be a development chief or Queen and still become a chief or Queen and even president or first lady. And there are instances that people abdicate their stools just to take up higher responsibilities in society and governance or politics like Mr. Yaw Osafo-Maafo, former Senior Minister did in the 1990s. And in some arrangements, we have chiefs, who sit on stools but still serve as “Agbotadua” for other chiefs. A case in point is Togbi Zewu, Dufia of Anloga, who is the “Agbotadua” for the Awadada of Anlo. That is why when Awadada is not home, it is Togbi Zewu who acts on his behalf.

In the days of wars, we have the brave men leading wars and some few brave women also helped in supplying them with food and water at the battlefield. And some of them also fought alongside with the men at the frontline. And others rendered very distinct helps to many that is greatly impactful. And these made some of them who distinguished themselves to be given titles and royal status.

Today we no more have wars but intellectual wars/arguments and development and progress. That is why every clan and tribe is trying their best to find a befitting Mama/Mamaga, who is developmentally inclined, an entrepreneur and very industrious to occupy their sits like the Mamaga Abui Buiekpor II, Mamaga of Anlo. Someone with manifold knowledge to be able to understand both the past and present generations as modernism beautifully clashes with tradition and culture in the world we live in today.

Culture they say is dynamic, reason clans are so much into getting someone as Mama/Mamaga who has the wherewithal to appeal to the old and the new generation to work together for the betterment of our land. She has to be the bridge between the old and the young, which Mamaga Abui Buiekpor II, Mamaga of Anlo typifies. She is from the rightful clan, it is her right and the next in line to be the Mamaga Abui Buiekpor II.

To my people who are envious, just marry from the Tovie clan or try to become an associate member in order to ease your pains. She was installed by rightful, very revered and meticulous people who have their requirements and procedures, not according to your judgments and prejudices. For, “Egli tsor ame gbor ye wo daemey”.

These days we live in a society that is evolving and cultures are influencing other cultures. As a Mamaga Abui Buiekpor II, Mamaga of Anlo and mother for all, she needs not to be selective in who is her son or daughter no matter who the person is. Today we speak of this generation not interested in our culture, custom and tradition. But we are ardently oblivious of the fact that to be able to bring them on-board, we need to understand their realm and know the things they are for. That is why there is the need to have a leader that perfectly understands our culture and tradition and the modern ways of life in other to bolster the interest of all in our culture and tradition.

In fact, it was the reign of Mamaga Abui Buiekpor, it is now the reign of Mamaga Abui Buiekpor II, Mamaga of Anlo. I call on all the youths of Anlo to support her to succeed. She is our own Sister and for once let us support one of our own to contribute her quota to the development of the great Anlo land. And for our sisters to also know that one of their own is able to lead them to believe in themselves and believe in what they do and excel like their fellow men.

Author: “Struggles on the Path of Sorrows” and “The Hero that Never was”