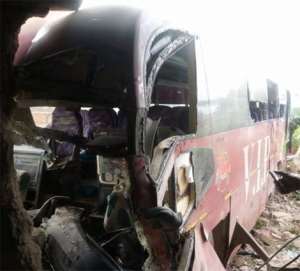 A Yutong VIP Bus driver, name yet unknown with registration number ER-9955-16 loaded from Accra to Juaboso is reported dead.

He died in a brutal accident by crashing into a storey building near the Kingdom Palace Restaurant on the Highway of Sefwi Asawinso in Wiawso Municipality in the Western North Region, Friday morning when he was making calls to deliver parcels on his way.

Some of the passengers also sustained some degrees of injuries in the fatal accident.

An eyewitness who narrated the incident on radio said the driver who was on a phone was not able to negotiate the sharp curve correctly which led the Yutong bus to hit the uncompleted storey building.

The driver reportedly died on the spot.

Some of the passengers who were without serious injuries said that the driver from the station started making calls because many parcels were given to him to deliver to their respective owners.

The body has since been deposited at a morgue in Sewfi for preservation while the injured persons are on admission at the same facility receiving treatment.

Meanwhile, the Police have since visited the scene to access the situation as the investigation is ongoing.