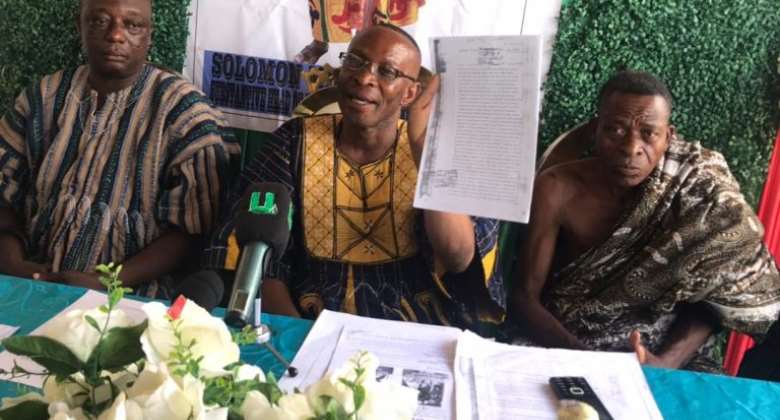 The head of Akwaanor Royal Family of Ashalaja, Solomon Mintah Ackaah, has debunked claims of his removal as the head of the family.

It would be recalled that at a press conference held on 6th May 2022, one Ismaila Armah Quansah asserted that Mr. Minta has been removed as the head of the family.

However, the head of Akwaanor family has called on the general public to disregard the falsehood peddled against him at the said press conference.

At a counter press conference held on Friday, May 13, by the Head of the family Solomon Mintah Ackaah, he stated that he has not been removed and has been going about his normal duties diligently.

Mr. Solomon Mintah Ackaah, recounting a few facts concerning his alleged removal as falsely perpetrated at the said Press Conference, stated that the Supreme Court brought the issue of the headship of the Family to its final conclusion on the 14th April 2022.

This according to Mr. Mintah, Ackaah happened in the decision of the High Court in 2021 adding that the substantive matter is still pending and that the matter has not been finally determined.

He further called on the public to disregard any misinformation at the said press conference that the High Court has determined the matter and declared Ismeila Armah Quansah as the head of the family.

"It is not true that Ismaila Armah Quansah is the head of family.

"I am still the substantive head of family and I have not been removed (emphasized) by the Elders and Principal Elders of the family as alleged. I wish at this point ask you to ponder over these," Solomon Mintah Ackaah stated.

Solomon Mintah Ackaah reiterated that the issue of the headship of the Akwaanor Royal Family has been settled from the decisions of the High Court, Court of Appeal and Supreme Court adding that he is still the head of the family and going bout his duties as such.

“I wish to at this point remind the general public that we have set up a Land Administration Secretariat being managed by Sissamba Empire Co. Ltd. And Akwaanor Royal Family to deal with the dictates of the Land Act,” Solomon Mintah Ackaah stated.

He said, those workers being referred to as landguards are all genuine people working for the interest of the company and the people of Ashalaja.

According to him, the allegation would be dealt with at the appropriate quarters where Mr. Adams Addy who made such allegations would be obliged to prove his claim.

Nii Okanfrah I therefore, urged the general public to have confidence in the establishment of the Nii Akwaanor Lands Administration Secretariat and that, the company would serve with respect and dignity.