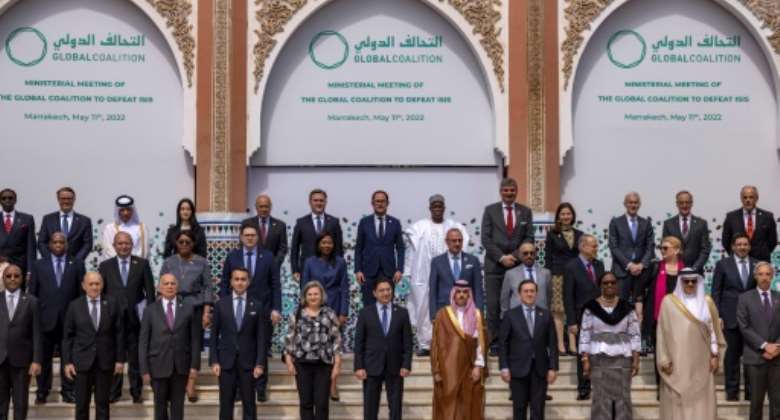 Delegates of the the ministerial meeting of the coalition against the Islamic State (IS) group pose for a photo ahead of their meeting in Marrakesh. By FADEL SENNA (AFP)

The global coalition against the Islamic State group gathered Wednesday in Morocco to coordinate efforts to prevent the jihadists staging a revival in the Middle East and North Africa.

US Secretary of State Antony Blinken was to co-host the meeting with Moroccan Foreign Minister Nasser Bourita, but Washington's top diplomat tested positive for Covid-19 and was replaced by senior diplomat Victoria Nuland.

Senior officials from dozens of other countries are also attending the meeting, under high security at a discreet luxury hotel in Marrakesh.

Nuland said they were committed to the "enduring defeat" of the jihadist group also known as ISIS, or Daesh in Arabic.

"Over the last several years, ISIS has been considerably weakened in Iraq and Syria, but it remains a threat, seeking any opportunity to reconstitute itself," she said.

Bourita said the threat posed by IS had "not diminished" and that the coalition sought to raise $700 million for "stabilisation activities" in parts of Iraq and Syria formerly held by the group.

The discussions were to cover "stabilisation efforts in areas previously impacted by Daesh", strategic communication against the group's "radicalisation propaganda" and the battle against foreign fighters, the Moroccan foreign ministry said.

The meeting comes three years after the coalition helped Syrian fighters to crush the "caliphate" IS had proclaimed in Iraq and Syria and as the jihadists step up their efforts to bolster their presence in the Sahel region and West Africa.

The Global Coalition against Daesh was formed in 2014 after the militants seized huge swathes of Iraq and Syria. It now includes 84 states and international organisations.

Officials have long warned IS still poses a worldwide threat despite its loss of a territorial base.

In January IS fighters launched their biggest assault in years, a prison break in the Kurdish-controlled northeast Syrian city of Hasakeh, sparking a week of intense fighting that left hundreds dead.

Nuland called that attack "a reminder of their intent and a wake-up call about how untenable the current situation is in northeast Syria."

IS has vowed to take vengeance for its elusive leader Abu Bakr al-Baghdadi, who blew himself up during a US raid in northern Syria in late 2019.

It has also urged its supporters to take advantage of the war in Ukraine to carry out attacks in Europe.