A new TV documentary alleges that children as young as 10 are using machetes to harvest pods.
By Channel 4 News
Research Findings 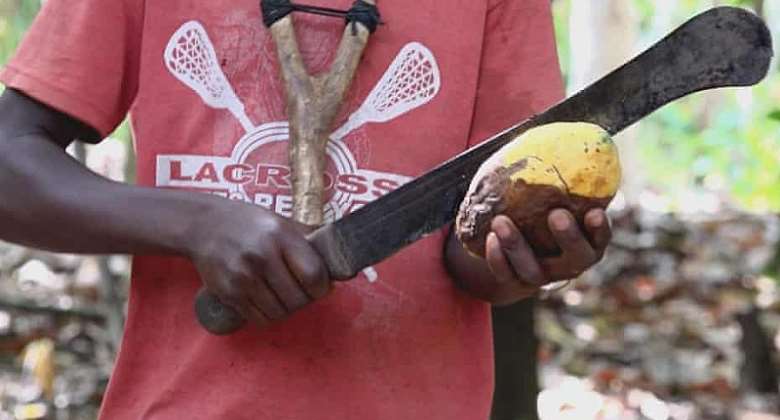 ‘It’s horrifying to see these children using these long machetes, which are sometimes half their height,’ said the founder of Slave Free Chocolate. Photograph: Channel

The food giant that owns the Cadbury brand is embroiled in fresh allegations of employing child labour after an investigation obtained footage of children working with machetes on cocoa farms in its supply chain.

Children as young as 10 have allegedly been found working in Ghana to harvest cocoa pods to supply Mondelēz International, which owns Cadbury. Campaigners say the farmers are being paid less than £2 a day and can’t afford to hire adult workers.

Ayn Riggs, founder of Slave Free Chocolate, which campaigns against child labour in cocoa farms, said: “It’s horrifying to see these children using these long machetes, which are sometimes half their height. Chocolate companies promised to clean this up over 20 years ago. They knew they were profiting from child labour and have shirked their promises.”

The Cadbury revelations come as this weekend millions of pounds will be spent on chocolate treats for Easter. More than £300m is spent on Easter eggs and novelties each year, including more than 80m boxed eggs. The chocolate market is worth £5.6bn in the UK, according to the market research firm Mintel. It includes about 330m Cadbury Creme eggs which are eaten every year.

Mondelēz, which made global profits last year of more than £3.3bn, has a sustainability programme, Cocoa Life. Its logo is marked on its products, including Cadbury Dairy Milk, and its website states: “No amount of child labour in the cocoa supply chain should be acceptable.”

Under the Cocoa Life programme, Mondelēz had, by the end of 2020, mapped about 167,800 cocoa farms that supply its businesses in Ghana, Côte d’Ivoire, Indonesia, the Dominican Republic and Brazil.

On one of the farms alleged to be supplying Mondelēz, two children with machetes were filmed by the documentary team weeding the plantations. Children were also filmed using sharp knives to open cocoa pods and swinging long sticks with blades tied to them to harvest the pods from the cocoa trees. None of the children were wearing protective clothing. The daughter of one farmer, claimed to be supplying Mondelēz, said she had sliced her foot open while using a long machete.

On one of the smallholdings, a niece of the farmer said she thought she was going to her uncle’s farm to help with childcare but claims she was being forced to work long hours on the farm and not allowed to go to school. When asked why she did not speak out, she said she was “afraid”.

Under Ghanaian law, it is illegal for children under 13 to work on cocoa farms. There is also a ban on anyone under 18 being involved in hazardous labour.

Ghana is the world’s second biggest cocoa producer after Côte d’Ivoire, and the crop, along with gold, is one of its most valuable exports. A cocoa farmer will typically receive 7p from a milk chocolate bar costing £1 in the UK, and 11p from a dark chocolate bar. 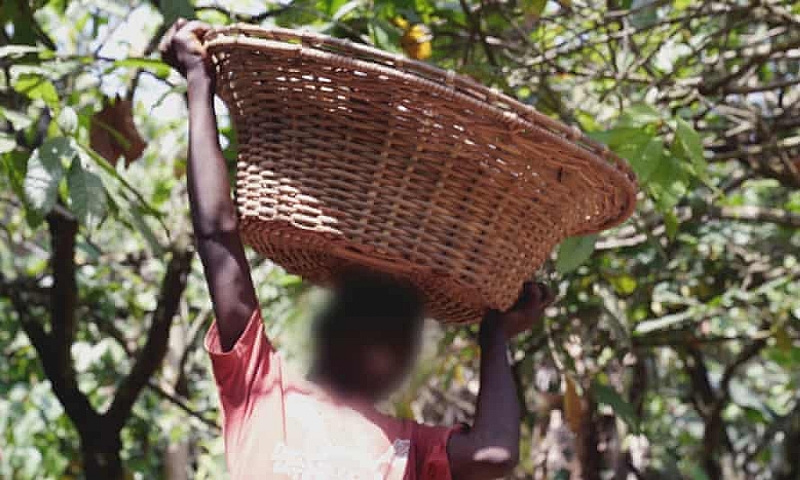 Children as young as 10 are allegedly being forced to work long hours on cocoa farms. Photograph: Channel 4

It means many live in extreme poverty while facing rising costs from the impacts of climate change, because of unpredictable weather patterns and changes in crop-threatening pests and diseases. Ninety percent of the world’s cocoa beans are harvested on small, family farms with less than two hectares of land.

In 2001, a cocoa industry agreement agreed to eliminate child labour. It was backed by the World Cocoa Foundation, a trade group whose members include the world’s biggest cocoa and chocolate companies, Nestlé, Mars Wrigley and Mondelēz.

But the protocol’s targets were postponed and adjusted in 2005 and 2008. A revised target in 2010, to reduce the worst forms of child labour in the cocoa sector in west Africa by 70% by 2020, has been missed. Campaigners say child labour is still endemic in the chocolate industry.

A study by the social research group NORC at the University of Chicago in 2020 found 1.56 million children were involved in the cocoa industry in Ghana and Cote d’Ivoire.

The report found prevalence rate of child labor in cocoa production among agricultural households in cocoa growing areas of Côte d’Ivoire and Ghana increased between 2008/09 and 2018/19. There was a 62 percent increase in cocoa production in the two countries during this period.

Joanna Ewart-James, executive director of Freedom United, an international organisation campaigning against child labour in the cocoa supply chain, said: “Child slavery and child labour have plagued the industry in Côte d’Ivoire and Ghana – which produce 60% of the world’s cocoa – for decades. Cocoa farmers are not earning an income that enables them to recruit the labour they need.”

On Friday, Freedom United will publish a scorecard rating global chocolate firms on their labour and environmental practices. The campaign group says Mondelēz has invested in community initiatives to combat child labour but, along with other leading companies, needs to pay farmers more money for its cocoa.

Martin Short, president of the World Cocoa Foundation, said: “Dealing with child labour abuses as a standalone issue will never work until we deal with the root cause of child labour, which is farmer poverty.”

Cadbury, one of Britain’s most famous companies, was controversially taken over by the US food firm Kraft Foods in January 2010. The American food giant changed its name to Mondelēz International in October 2012.

Mondelēz considers a wide range of measures are required to combat child labour. The company has been involved in research which shows that increasing the price of cocoa will not on its own lift many farmers out of poverty, because they are farming on small amounts of land.

A Mondelēz International spokesperson said: “We’re deeply concerned by the incidents documented in the Dispatches programme. We explicitly prohibit child labour in our operations and have been working relentlessly to take a stand against this, making significant efforts through our Cocoa Life programme to improve the protection of children in the communities where we source cocoa, including in Ghana.

“The welfare of the children and families featured is our primary concern and we commit to investigating further so we can provide any support needed. As part of our Cocoa Life programme, we have child labour monitoring and remediation systems in place in Ghana, which means community members and NGO partners are trained to provide assistance to vulnerable children, and once identified, we can help to address any cases of child labour.” The company said it had requested additional information from the Dispatches team so it could investigate.

Record-breaking African teams bounce back from 2018 disappoi...
26 minutes ago