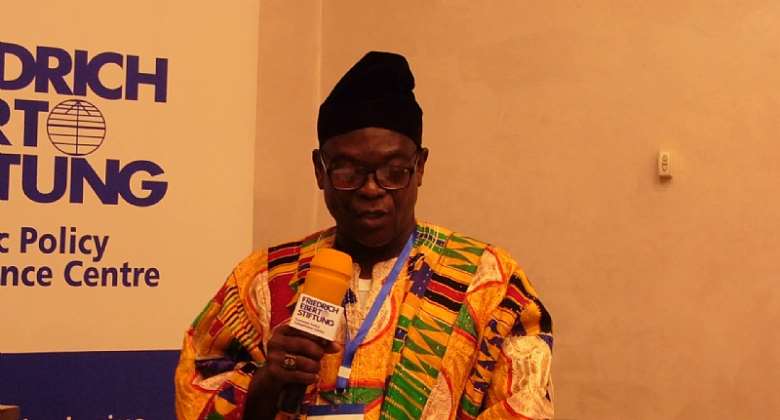 Ghanaians have been urged to think global and act local to address the imminent dangers posed by climate change in the country.

A climate change advocate and Chief of Nakwabi Traditional Area in the Bole Paramouncy in the Savannah Region who made the call observed that climate change is a serious threat to human existence.

He said climate change that will continue to cause devastating effects on humans and the needed investments for sustainable development if care is not taken to address the issue.

Speaking in an interview with Modern Ghana News on the side-line of the gender and climate change conference held in Bolgatanga, the Speciality Market and Cashew Value Chain Expert indicated that the world has become a global village and "the kinds of things we do everywhere affects everybody across the globe."

He cautioned that climate change has the tendency to erode all the achievements chalked in various sectors of Ghana's economy.

He stated that national discussion on climate change should be given a holistic approach and considered a priority.

According to him, climate change should be discussed in all facets of society emphasising the role of traditional authorities, political leaders, players in the Agriculture Sector, and the role of businesses. "Some activities embarked upon in all these sectors contribute significantly to degrading the environment."

The Nakwabi-Wura stated that considering the current state of events related to the negative impact of climate change, he believes climate change will not to be addressed anytime soon. "Therefore society cannot wait for the irreparable damage to be done before waking up to our responsibilities."

He urged leaders to ensure that discussions on climate change be factored into development and strategic plans and make available resources meant for reducing the negative impact of climate change equally and timely to society.

The climate change advocate Nakwabi-Wura said whiles it is important for Ghana to actively participate in the United Nations Climate Change Conferences to accelerate action towards the goals of the Paris Agreement and the UN Framework Convention on Climate Change, it is also critical for Ghana to prepare local measures that best suit our situation, especially considering the fact that the most affected sector is agriculture which is rain-fed.

He further stated that the major contributors to pollution and related climate destructions globally are rather reluctant to commit to providing the needed resources to support lesser polluters who are also the most affected.

The Chief of NakwabI, a commercial farmer who is into cashew, mango and shea production suggested the inclusion of climate change studies into the educational curricular as a subject on its own rather than teaching it as a topic under agriculture or geography.

He said if the young generation are given the necessary guidance and tuition on the current state of the climate and its effect on their future they will be adequately prepared to tackle it.