Sanuori community in dire need of a primary school block 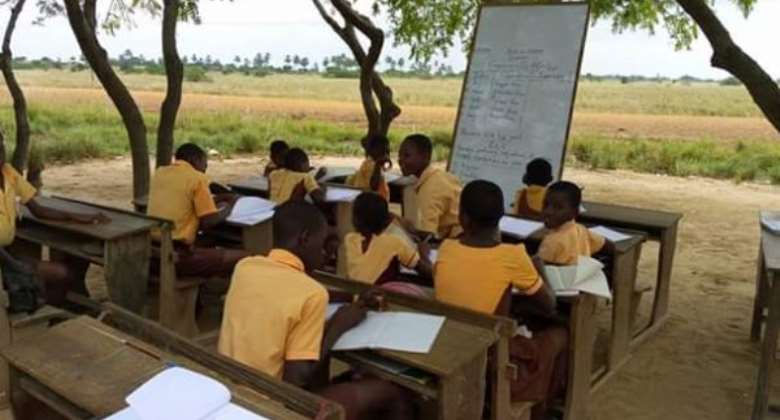 The residents of Sanuori, a rural community in the Wa West District, have appealed to the government to provide classrooms for the primary school at the community.

The residents said the school children at the community currently endured the harsh weather conditions to learn under trees due to the lack of classrooms for them.

Mr Kunsusula Gyatuli, the Chairman of the Sanuori Basic School Management Committee (SMC), told the Ghana News Agency (GNA) in an interview that the school had classrooms for only the Kindergarten children.

He acknowledged the importance of education to the development of every community and said the harsh conditions under which children at Sanuori learned discouraged the children from attending school.

“Since we started the school here, we have been struggling with it, we put up mud structures and they collapsed. We informed the authorities to help us, but they are not doing anything for us.

“We built the classrooms ourselves three times, but they all collapsed. During the rainy season the school closes. The school is progressing and we now have from KG to primary six, but the infrastructure is not there”, Mr Gyatuli explained.

He therefore appealed to the Wa West District Assembly and benevolent individuals and organisations to support them by providing the school with classroom a block to alleviate the plight of the school children.

He also indicated that the children had to trek several kilometers to nearby communities for Junior High School education, which he said was a challenge to the school children.

Mr Bamba Dong-yiri, a Unit Committee Member of the Sanuori Electoral Area, said enrollment in the school was appreciating and stressed the need for classrooms for the school.

He expressed worry that some of the school children were losing interest in schooling due to the lack of classrooms for them, and said the school might collapse if the necessary steps were not taken to build classrooms to salvage the situation.