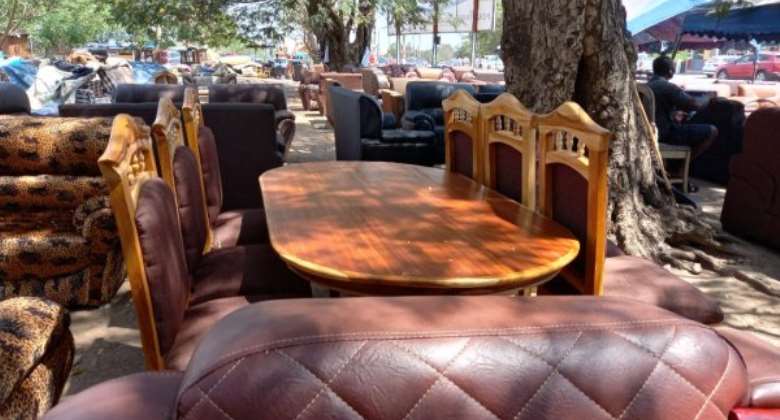 Scores of furniture manufacturers have appealed to the government to ban imported second-hand furniture as it was also affecting the growth and development of the local industry.

"The furniture we produce here are of quality, and less expensive as compared to the second-hand ones and I believe if it is banned, the people will have no choice but to buy from local furniture producers which will boost the economy," Mr Henry Kwame Gyamfi of God's Time Furniture Works at Community 4 Tema told the Ghana News Agency in an interview.

He said not everybody can be enrolled in school, so the government should support the informal sector to survive and make it lucrative to attract more people into learning the work and also to compete with the foreign goods.

He said the government must protect local industries as the importation of cheap foreign goods that flood the market was unhealthy for the development of the local economy.

Mr Gyamfi who spoke on behalf of scores of furniture manufacturers in Tema said: “we cannot build our nation based on over-dependency of imported goods that have an advantage over our local production, we need the government's intervention to survive the surge of imported goods into the country”.

He noted that the furniture industry since the emergence of the COVID-19 has suffered from low patronage as a result, players in the sector fear its imminent collapse if the government does not support it

The furniture industry players claimed that their capital is locked up, while bank interest on loans they contracted to manufacture the furniture keeps rising higher and higher.

He explained that the majority of their customers come from the hospitality industry, and noted that now that activities in the hotels and other amusement centres are at ground zero, they are not undertaking the periodic change of furniture and other artefacts.

Mr Gyamfi also revealed that most often the Christmas festive season used to be their main harvest time as a section of the public prefers to periodically change their furniture in preparation for Christmas but since 2019 the situation has changed, “we encounter very low sales during these seasons all due to COVID-19”.

He added that sadly in spite of these challenges the cost of materials had increased due to the pandemic, from foam, wood, clothes, leather among others, and “our work is such that, we don't wait for orders before we produce so if after production we don't get people to buy, it becomes a big problem for us.

According to him, some of the guys who were into apprenticeship had to go back to their hometown because he could not support them financially or diverted into other menial jobs for survival.