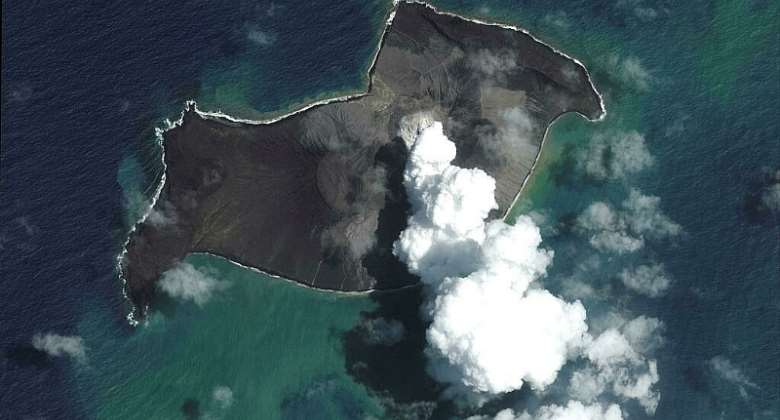 France will send aid to Tonga, which has suffered extensive damage and has been virtually cut off from the rest of the world by a massive underwater volcanic blast and tsunami on Saturday.

France, which has territories in the South Pacific, pledged to help Tonga in cooperation with Australia and New Zealand, which have sent reconnaissance plane flights and readied aid ships.

The scale of the damage from the Hunga Tonga-Hunga Ha'apai volcano is emerging through patchy satellite phone contact, surveillance flights and satellite images.

The eruption, one of the largest in decades, blew 30 kilometres into the air and deposited ash, gas and acid rain across the Pacific.

Power has been restored to parts of the capital, Nuku'alofa, on the largest island of Tongatapu, home to the majority of the Kingdom's 105,000 people, as has local phone service, but international communications remain cut.

The eruption severed an undersea communications cable between Tonga and Fiji that operators said would take up to two weeks to repair.

The UN Office for the Coordination of Humanitarian Affairs (OCHA) said surveillance flights had showed Nuku'alofa was blanketed in two centimetres of volcanic ash and dust, it said. The ash will potentially poison water supplies and cause breathing difficulties.

France, a neighbour to Tonga through its overseas territory Wallis and Futuna, some 800 kilometres north is “ready to respond to the population's most urgent needs," the foreign ministry said Monday.

This assistance would be provided through a humanitarian aid mechanism setup with Australia and New Zealand in 1992 known as FRANZ.

Australia said ash must be cleared from Tonga's airport before it can land a C-130 military plane with aid.

Australia's HMAS Adelaide, and New Zealand's HMNZS Wellington and HMNZS Aotearoa have been deployed in case of any aid request from Tonga, which lies three days' sailing away.  Aid agencies, which would usually rush in to provide humanitarian relief, said they were unable to contact local staff.

Even when relief efforts do get under way, they may be complicated by Covid-19 entry restrictions, as Tonga only recently reported its first-ever case.