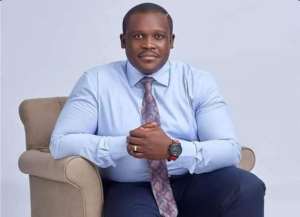 Outspoken Member of Parliament (MP) for Ningo Prampram Constituency, Mr. Samuel Nartey George has been named by FAKS Investigative Services as the overall best parliamentarian for 2021.

Samuel Nartey George from the opposition National Democratic Congress (NDC) became the toast of many when he and seven other MPs championed a private members’ bill to ban LGBT+ advocacy in Ghana.

The Ningo Prampram lawmaker who took the fight to anyone who crosses his path did not even spare the outgone Australian Ambassador to Ghana Gregory Andrews.

Sam Nartey George warned the Australian High Commissioner to Ghana to desist from trying to impose ideas of homosexuality on Ghanaians. In an interview on Starr Chat, an angry Sam George said: “I warned him that I’ll beat him in this town.”

The height of his aggressive crusade was when some 15 renowned legal, academic and civil society professionals filled a memorandum challenging the anti-gay legislation submitted to Parliament.

In the memorandum, they contend that the Promotion of Proper Human Sexual Rights and Ghanaian Family Values Bill 2021, which seeks to criminalise LGBTQ+ and adjacent activities, is an “impermissible invasion of the inviolability of human dignity.”

The leader of the group, Lawyer Akoto Ampaw accused Sam George and other proponents of the anti-gay bill of adopting old tricks by making baseless accusations against person who have raised concerns against that bill.

In knee jerk reaction, Sam George describes the group including Akoto Ampaw and Prof Kwame Karikari as hypocrites following their submission on the bill.

Sam George said if he is asked to score Professor Karikari on his submission, he would give him an F.

The Investigative Services annually releases a compilation of the best Ministers, MPs, and Chief Executive Officers (CEOs) of the various public institutions.

After a survey for the 2021 edition conducted between October and December last year, FAKS has issued a release announcing the winners of the 10th edition.

In the release, Sam George has been named as the ‘Overall Best MP’.

According to FAKS, the survey focused on opinions from the public, assessment from the ministries, agencies and as well as information from the Regional Coordinating Councils (RCCs).

The public contributed largely to the outcome of the survey, especially concerning the Ministers, Deputy Ministers, Regional Ministers and the CEOs of State Institutions.

FAKS Investigative Services team is made up of researchers, media practitioners and academia that do the assessment based on the outcome of the findings they received.

The survey took place between the months of October and December, 2021 and it was the 10th Edition since FAKS started this project.

Bogoso explosion: Gov’t will do everything to restore normal...
54 minutes ago