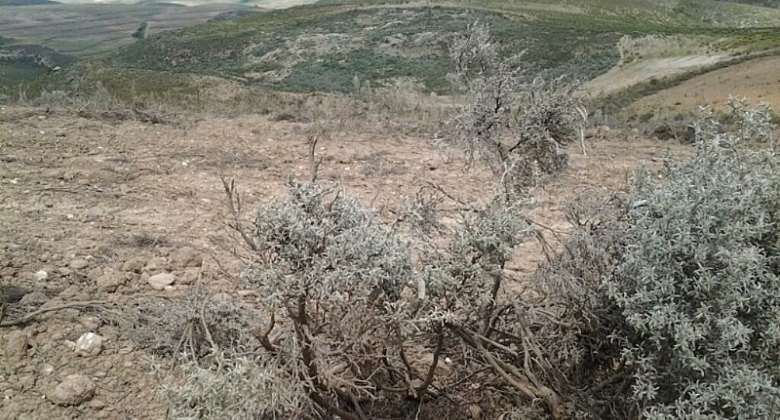 Conservationists in South Africa have developed a new app that will help them to monitor South Africa's unique renosterveld landscapes using satellite images to detect when farmers are illegally encroaching into this critically endangered ecosystem.

The renosterveld means rhino fields. It's a land of rolling hills stretching across the Western Cape's Overberg and Swartland regions, and was once covered with grasses and shrubs and populated with large mammals like black rhinos. But after many decades of farming, the natural vegetation has all but disappeared under the plough to be replaced with crops like wheat and barley.

Only an estimated five percent is left -- mostly small fragments persisting on privately owned farms. Those that do remain are home to diverse life, especially flowers. But they too are threatened.

“I shudder to think what it could be, but it must be pretty severe. You think -- 95 percent gone. There's no way we haven't lost hundreds of species.”

Fewer than 50 of the fragments of renosterveld that remain are bigger than 100 hectares (247 acres).

But even these are still home to endangered birds of prey like black harriers and secretary birds, and mammals like the ant-eating aardvark and aardwolf. In 2012, the ORCT discovered six new species of flower and others have been found since.

Now help is at hand to protect these remaining fragments. The Global Overberg Renosterveld Watch app uses satellite data that provides information from the landscape at a much broader scale.

Satellite signals
"We're looking for the characteristic signals in the satellite data that tell us that we've had this change in the land cover -- change from our natural habitat to agriculture," said Glenn Moncrieff, a data scientist with the South African Environmental Observation Network (SAEON), and one of the app's chief developers.

Renosterveld used to cover around 470,000 hectares (over a million acres) of the Overberg, but only around five percent of that figure is thought to be still intact. Losses are continuing.

A study Moncrieff published in February used satellite data to show that more than 478 hectares (1,181 acres) was lost between 2016-2020.

“We hope that this application and our renewed efforts through our collaboration with law enforcement and conservation NGOs in the region will act as a deterrent to slow those rates,” he said.

Rudolf van Jaarsveldt is head of communications at the Western Cape government's department of environmental affairs and development planning.

He says the satellite images supplied to them by SAEON are helping them to improve investigations into the illegal ploughing up of the renosterveld.

But a shortage of qualified staff is hampering their work. Only four environmental management inspectors are assigned to cover the whole of the Overberg and the neighbouring Cape Winelands regions. He says this is not enough.

There are other challenges. Illegal ploughing often occurs on remote farms and access to them is sometimes denied by the owners, meaning investigators have to apply for search warrants from local magistrates.

Carrot and stick
Moncrieff, the data scientist at SAEON, says both “a carrot and a stick approach” is needed.

“Law enforcement doesn't have the capacity to simply arrest everyone who's breaking the law,” he said.

This is where Curtis-Scott's organisation comes in. It teaches people to love the renosterveld instead of seeing it as wasteland.

The ORCT has signed agreements with at least 18 farmers who have pledged to protect their remaining patches of renosterveld forever.

But there are hundreds of farmers in the region, and the ORCT hasn't managed to convince all of them.

"Seeing (renosterveld) get lost and ploughed is like watching someone die in front of you," said Curtis-Scott.

"It's heart-breaking. I just wish we could get landowners to understand why it actually matters. That's my quest, and it's not an easy one."