Where Is The Blackman's Paradise ? 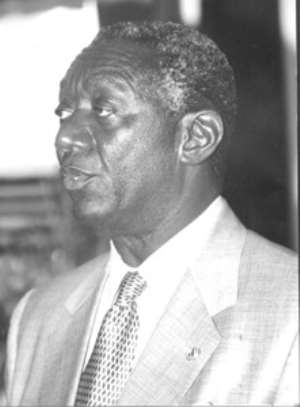 Wonders, they say will never end and as i have said time and time again, all politicians are the same. They seem to be very honest whenever they are seeking power but once they get it, they start maltreating and behaving in a funny manner and it is really a surprise to me that, the current chief of staff could send out policemen to arrest people just for staying in his house and this is just ridiculous. People in power seem to do whatever they want anytime they want it and this is just tyranny and must be stopped now. If this is found to be a true allegation, the chief of staff must be sacked straight away so as to justify the zero tolerance slogan which has always been used my Mr. Kuffour since the day he sworn into office as President.

It is really true that there are so many corrupt practices in the system and oh! what are these politicians like and not a single one of them is as good as they seem to be. Today, it is the minister of trade diverting funds and tomorrow it is another thing and I think Mr Kofi Wayo was right to have asked the President to sack most of his ministers as they are as corrupt as the former ministers of state. The NPP came to power based on the numerous promises they made to Ghanaians but they seem to be committing the same old mistakes that te NDC committed and this can be very catastrophic if not handled properly. Ghanaians deserve more than what they are getting now and I think it is time Mr Kuffour keeps his promise to Ghanaians or resign as we can't take it anymore.

Our motherland was plagued with 21 years of corruption and I reckon how happy the masses were on the day that the NDC was kicked out of the castle and thus Mr Kuffour must not let them regret for their actions at all as I know he can do better. Ghana is a great country with so many resources and thus we shouldn't allow unfavourable macro-economic factors to be the main reason why how people must suffer as we can always manage these factors. He can stop giving out huge loans to those Parliamentarians and stop spending so muc money on his officials and this will help build the economy.

Too much money in circulation has caused the massive devaluation of the cedi and I always thought the economists would know better and stop the President from bringing ot those 10000 and 20000 cedi notes. Today, inflation keeps on rising everyday and interest rates are on the all time high and how can people invest out there then? The Golden Age will only be a dream unless the curent government put measures in place to curb the high inflation rate, high interest rates, high rate of unemployment, high exchange rate and low productivity as the blackman's paradise would have to be attained.

The economists would have to know that, every investor is rick averse and thus they need to put things right before they can woo some really good investors to the country. No one would like to invest in a business knowing that the PBP is far away not forgetting the fact that the accounting rate of return(ARR) is very low. The blackman's paradise that our leaders have always promised could probably be achieved when things are out right and corruption is brought to the minimum. Those flamboyant pastors who amass wealth at the expense of the poor are just there and I sometimes wonder what makes them rob the poor.

Most of these pastors preach nothing but materialim and it is no surprise at all that there is so much corruption in the system. Duncan Williams, Mensah Otabil, Heward Mills to mention but a few only preach materialism and I wouldn't be surprised if they are arrested one of these days as they are all fake. We should better preach what is in the Bible instead of materialism as it will only affect our young and ailing economy. President Kuffour, please live up to expectation and stop these "bandits" who do nothing but ruin the lives of the masses. Long live the Blackman's Paradise and short live those hypocrite who claim to be men of God as they will soon be brought to judgement.

Commercialisation of religion is just as bad as corruption and this must be stopped now. Hey! I've just forgotten that, they are signs of the times and prophecies coming true. God will soon lash these businessmen who call themselves Pastors and so they should better advise themselves and stop misleading people. Julian Adomako-Gyimah M.InstBA Great Britain Views expressed by the author(s) do not necessarily reflect those of GhanaHomePage.