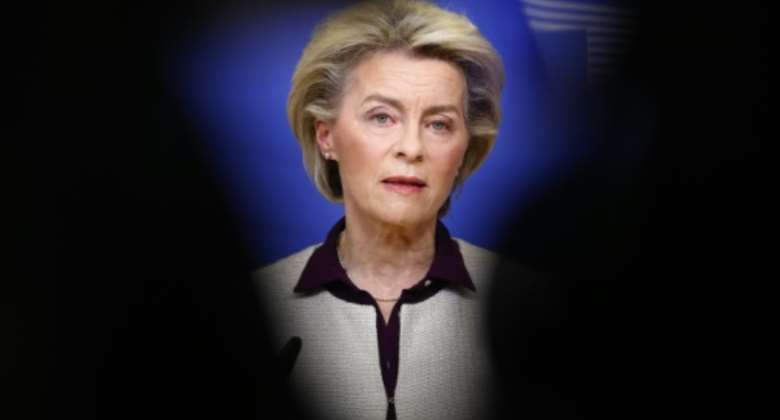 The EU commission said it would recommend that EU member states suspend all air travel beween the bloc and countries with the new Covid variant. By JOHANNA GERON (POOL/AFP/File)

A new Covid-19 strain first detected in southern Africa emerged in Europe and Israel on Friday as nations rushed to ban flights to slow the spread of the variant, feared able to overwhelm current pandemic measures.

Markets plunged as news sank in that the new variant -- more infectious than the highly contagious Delta and possibly more resistant to vaccines -- could potentially deal a heavy blow to the global recovery.

Scientists are now racing to determine the threat posed by the heavily mutated strain, designated by its scientific name B.1.1.529.

The World Health Organization (WHO) said it could take several weeks to understand the variant and cautioned against imposing travel curbs while scientific evidence was still scant.

Europe is already struggling with a coronavirus surge. Returning restrictions have sparked rioting in some areas, including the French Caribbean island of Martinique where 10 police officers were injured on Thursday.

Number of new Covid-19 cases over 7 days and the change in percent from the previous week, as of November 25. By (AFP)

Belgium's government announced the first publicly known case of B.1.1.529 in Europe: an unvaccinated person who returned on November 11 from Egypt via Turkey. The health ministry did not give the individual's nationality, age or gender.

"It must be repeated that this is a suspect variant -- we don't know if it is a very dangerous variant," said Belgian Health Minister Frank Vandenbroucke.

The strain has also been detected in Botswana and Hong Kong among travellers from South Africa.

Israel said it has quarantined three people, one having just returned from Malawi.

Austria, the Czech Republic, Germany, Italy and the Netherlands on Friday joined Britain in suspending flights from the region.

Returning restrictions have sparked rioting in some areas, including the French Caribbean island of Martinique where 10 police officers were injured on Thursday. By LOIC VENANCE (AFP)

EU Commission chief Ursula von der Leyen said Brussels would recommend that EU member states suspend all air travel between the bloc and countries with the new Covid variant, while Japan said it will require a 10-day quarantine period for travellers from the area.

The shock measures all included South Africa, and in many cases some or all of the following: Botswana, Eswatini (Swaziland), Lesotho, Namibia, Zambia and Zimbabwe.

"The last thing we need now is an introduced new variant that causes even more problems," Germany's acting health minister Jens Spahn said as his country battled a ferocious fourth wave of the pandemic.

The Philippines also suspended flights from South Africa, Botswana "and other countries with local cases or with the likelihood of occurrences," according to the president's spokesman.

The rush to close off southern Africa comes a day after scientists in Johannesburg said they had detected the new strain with at least 10 mutations, compared with two for the Delta.

The variant is of "serious concern" and had been blamed for a surge in infection numbers, authorities in South Africa said.

The WHO said it was "closely monitoring" the variant and weighing whether it should be designated a variant of "interest" or of "concern".

It was also up to WHO to decide whether to give the strain a name taken from the Greek alphabet, as for previous major variants such as Delta.

Some, such as the European Commission, have already taken that step and were calling it the Nu variant.

Vincent Enouf, of the Pasteur Institute in Paris, told AFP that the variant "is something very particular that can be worrying" given its genetic composition.

But, he said: "We must remain reasonable, continue to monitor it and not completely alarm the population."

The European Medicines Agency said it was "premature" to talk about modifying current vaccines to target the new variant.

Germany's BioNTech and US drugmaker Pfizer said they were studying the variant, with impact data expected "in two weeks at the latest" to say whether their jointly developed vaccine should be adjusted if B.1.1.529 spreads globally.

In South Africa, meanwhile, helpless and furious tour operators deplored the quick end to the tourist season with safaris and beach holidays cancelled by the thousands.

"This is a knee-jerk reaction but with such a strong snowball effect," said tour organiser Richard de la Rey.