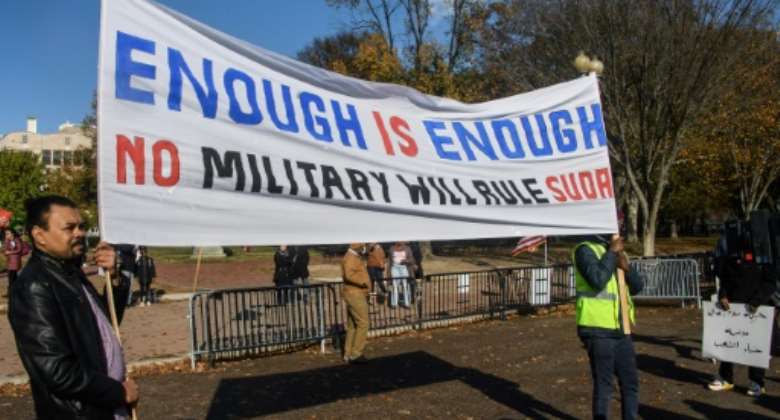 Sudanese Americans protest the military coup in Sudan in front of the White House in Washington, DC, on November 13, 2021. By Nicholas Kamm AFP

"Security forces raided the house of Al-Musalami al-Kabbashi, the Al Jazeera bureau chief in Sudan, and detained him," the network said on Twitter without elaborating.

Al Jazeera has given prominent coverage to demonstrations against the October 25 coup but last week it also aired a detailed interview with top general Abdel Fattah al-Burhan, one of only two he has granted.

Demonstrations against Sudan's latest coup, including by tens of thousands of people nationwide on Saturday, have occurred regularly despite a rigorous internet outage.

Protesters are voicing their preference for civilian rule, the transition to which was interrupted when Burhan declared a state of emergency, detained the civilian leadership and ousted the government which was installed after the April 2019 ouster of autocratic president Omar al-Bashir.

Burhan led a military council which, the month after Bashir's removal, ordered Al Jazeera's office closed, the network said at the time. It was allowed to reopen in August that year after authorities reached agreement on the now-disrupted transition to civilian rule.

According to an independent union of medics, five people were shot dead on Saturday while one died from "suffocation by tear gas".

The latest deaths brings to 21 the number of people killed in anti-coup protests since the putsch, according to the medics.

Gunshots were heard and tear gas fired on Saturday as security forces tried to break up the protests, witnesses and AFP correspondents said.

Police denied using "live rounds", saying they used only "minimum force", and 39 of its personnel were "severely wounded" in confrontations with the protesters.

The police accused protesters of attacking police stations and said the the demonstrations "began as peaceful but quickly veered off course".

Hundreds of people also demonstrated in Europe on Saturday, and in Washington, DC, to support the Sudanese protesters.