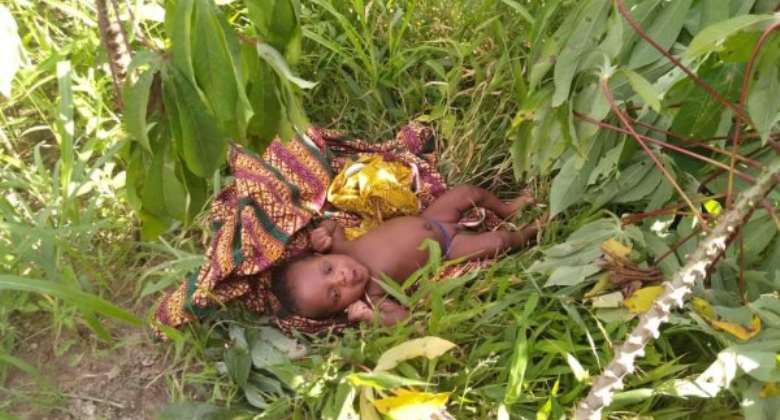 A month-old baby has been found at Agbaflome-Bypass, a suburb of Akatsi in the Akatsi South Municipality of the Volta Region.

Chief Superintendent of Police, Mr Atsu Joseph Dzineku, the Akatsi South Municipal Police Commander disclosed to the Ghana News Agency that at about 1430 hours on Wednesday, his outfit had a distress call from one Dordoe Wisdom of Akatsi Agbaflome-Bypass that at about 1355 hours same day, he also received an information from his wife that she has found a baby boy who was abandoned in a bush closer to their house, located at the back of a new shopping mall in the area.

Mr Dzineku said he quickly led his team of Police Domestic Violence and Victim Support Unit (DOVVSU) officers to the scene, where they found the said baby boy lying naked on a piece of cloth in a bush under a cassava tree crying aloud.

“So, we picked him to a hospital in the Municipality, where he was examined and found to be stable and healthy,” he said.

Mr Dzineku said the baby was at a health facility for safe keeping and that “the Social Welfare Department has been fully notified for further action."

They are therefore, appealing to individuals and members of the public to offer any vital information in locating the family of the baby.

Some residents who interacted with the GNA, expressed worry about the fact that the incident was the second to have happened in the year after a two-month-old baby boy was also found alive in an uncompleted building by residents of Avetite, a suburb of Akatsi in the Akatsi South Municipality of the Volta region on April 7.