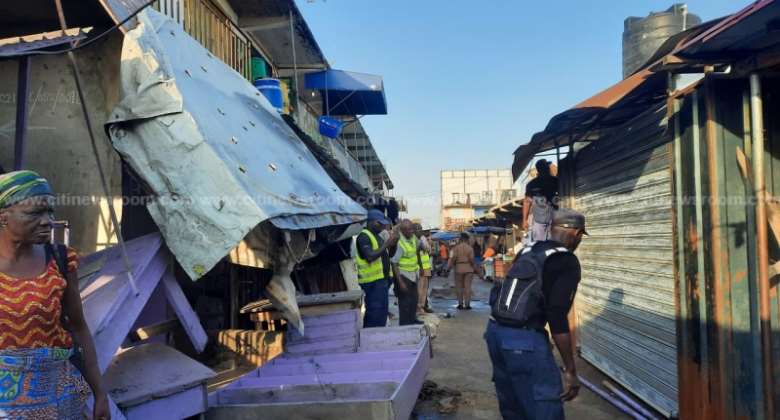 Portions of the Kasoa old market have been demolished by a joint team of Police and a taskforce from the Awutu Senya East Municipal Assembly.

This is to make way for accessibility in the unlikely event of a fire outbreak in the market.

According to Isaac Ofori, Municipal Engineer for the assembly, although they had difficulties demolishing portions of the market, the exercise will not be in futility since it is aimed at safeguarding lives and properties.

Speaking to Citi News, Isaac Ofori noted that some portions of the Kasoa New market have also been identified for demolition.

“We have made a series of announcements to create the awareness of the demolition exercise, but they [market women] have decided not to move. So we decided to apply force to make sure they move for us to create an access road for the unlikely event of fire outbreak.”

“We will move to the Kasoa New market after this exercise because a similar thing is happening there and if care is not taken, it can bring calamity in the event of a fire,” Isaac Ofori told Citi News.

He noted that they have learnt lessons from other market fires across the country and have decided to take a cue from such incidents.

“Two years ago there was a fire outbreak in this market and fire officers had difficulties going to douse the fire. There have been similar incidents across the country where properties running into millions of cedis have been lost as a result of the lack of access road and we won’t wait until it happens to us,” Isaac Ofori said.

He also urged persons in the market, including shop owners to refrain from extending the frontage of their shops.

“If you rent a shop, and it’s blocking access, you should know,” Isaac Ofori said.

Patrick Bawa, the Assistant Divisional Officer Grade 2 of the Ghana National Fire Service in Kasoa, believes establishing spaces in the market is one of the safest ways of fighting fire.

He urged the assembly taskforce to continue with its routine check to ensure the traders comply with the directive.

“They should sustain the exercise so that the traders will not come back again, and I’m praying that the operational men from the assembly will be up to the task.”

The officer also complained about the lack of fire hydrant in Kasoa urging the assembly to do well to provide one.

“There is no fire hydrant in Kasoa, and it is not good, although we have some within the vicinity. We are still collaborating with the assembly so that in the near future we will have one” ADO Grade 2 Patrick Bawa told Citi News.

Hottest Photo Reports
Catch up with all the political quotes from our politicians.
Advertise here
More Social News
ModernGhana Links
15 pesewas reduction in fuel prices insignificant but welcoming – Commercial drivers
Drivers disappointed over 15pesewas reduction in fuel price at only GOIL stations
We'll protect our lands without resorting to violence — Youth of Wasipe
Less than 40% of refugees have registered for relocation
ECG moves district office from Somanya to Juapong
Man carrying AK-47 in Bawku-bound bus arrested at Osino
We don't know All Teachers Alliance group opposing the One Teacher, One Laptop — NAGRAT
Supply laptops to teachers for monies deducted before end of 2021 – GNAT tells GES
Immigration arrests 55 irregular migrants at Tuobodom
TOP STORIES