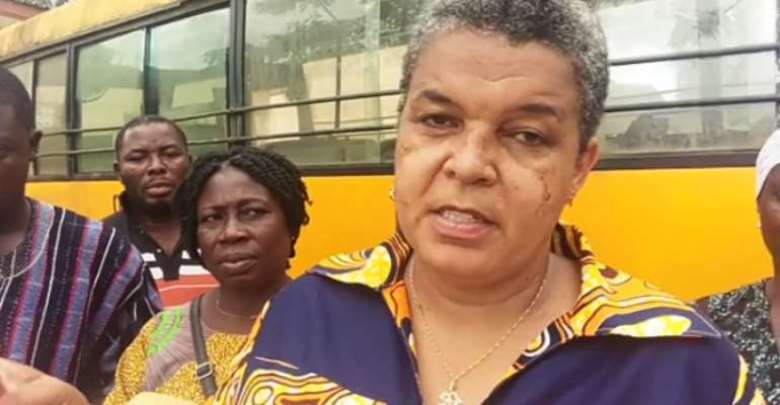 I read with nationalistic sentiments, a story on the above subject authored by one Simon Agbovi, a journalist, and published by your credible online portal. As a constituent of Awutu Senya West with considerable knowledge on the equipment and infrastructural history of the Bawjiase Polyclinic, I deem it a civic responsibility to share my thoughts on this subject.

In the first place, I would want to thank Hon. Gizella Tetteh-Agbotui for the few bags of cement she donated to the Bawjiase Polyclinic. As a Member of Parliament who is entitled to a Common Fund, if all that she could do for the Bawjiase Polyclinic is to donate a few bags of cement, I think we still have to appreciate her and encourage her to do better.

Nevertheless, the comments passed by Hon Gizella Tetteh-Agbotui upon delivering the few bags of cement in support of an ongoing project at the health facility is quite distasteful and must not be countenanced. Hon Gizella Tetteh-Agbotui thought it wise to appeal to the current Nana Addo led administration to fix the Bawjiase Polyclinic which she claims is not able to meet the health needs of the over 30,000 constituents living in and around Bawjiase.

"It's sad the state of a health facility that the lives of about 30,000 people depend on. The government must fix this," Hon Gizella Tetteh-Agbotui who knew the state of this Polyclinic when her sister was the MP for the area under the erstwhile John Mahama led government, commanded the current government to fix it.

Just as all other constituents, I think there is nothing wrong with the Hon MP appealing to government to fix a health facility for the good of the people. However, my issue lies in the fact that Hon Gizella Tetteh-Agbotui knew very well that the same health facility was in a worse state than it is today when her sister, Ms Hanna Serwaa Tetteh was the MP of the area under the erstwhile John Mahama led NDC administration.

What is worse about her comments? Hon Gizella Tetteh-Agbotui was an Assembly Member in the Awutu Senya West District and Chairperson of Infrastructure, Works and Construction Committee when this said health facility was in the worst of conditions under her sister who was then a Member of Parliament and Minister of Foreign Affairs.

Moreover, she also knows that the Bawjiase health facility was just a health centre but for the intervention of her predecessor, Nenyi George Andah, it was upgraded to a polyclinic. Before it could be upgraded into a polyclinic status, Nenyi George Andah renovated the existing wards, provided hospital beds and other hospital equipment, including an incubator and lobbied for two permanent doctors to be posted to the facility. That is to suggest that when Hon. Gizella Tetteh-Agbotui and her sister were in charge, the Bawjiase Polyclinic did not have the facilities she is describing today as bad and needs fixing.

Being a witness to what her predecessor, Nenyi George Andah, and the NPP government did to improve the Bawjiase Polyclinic, Hon. Gizella Tetteh-Agbotui should have acknowledged the government for the good work done before issuing the command she couldn't issue when her sister, Ms Hanna Serwaa Tetteh superintended over that same facility.

Unfortunately, a hospital staff who also spoke on same issue failed to acknowledge what the NPP government has already done to improve the health facility. Just like Hon Gizella Tetteh-Agbotui, she went on to bemoan the state of the Polyclinic without thanking the former MP and the current Nana Addo led government for providing the facility with facilities that qualified it to be upgraded to the status of a polyclinic.

I am tempted by what is happening recently to believe that it is a political ploy by Hon Gizella Tetteh-Agbotui to covert credit for the projects of the current government. Recently, her communicators boldly credited her for government projects in Bawjiase, claiming she lobbied for them. How can a Member of Parliament who jabs a government at the slightest opportunity, successfully lobby same government for projects?

Sadly enough, Hon Gizella Tetteh-Agbotui's communicators are on Facebook, suggesting that a common infrastructure built to shed the Awutu Senya West Constituency Ambulance was as a result of the pressure the MP mounted on the District Assembly. I don't think this attitude is politically healthy enough to attract the development our people are craving for.

As a concerned constituent and an opinion leader with express interest in the development of the Awutu Senya West District, I would like to appeal to the administration of the Bawjiase Polyclinic to extend their appeal to Mr. Eugene Arhin, the Director of Communications at the Presidency, who is already doing a lot to improve the livelihood of his people.

I don't think Eugene Arhin who has already constructed a library at Beraku, renovated a few schools and built one, provided Senya Senior High School with a borehole and promised to get them a bus and a pick up, provided both Awutu Beraku and Senya Beraku Traditional Councils with air conditioners, plastic chairs, refrigerators, laptops and printers and is working at upgrading Senya Health Centre into a polyclinic would play partisan politics with the health needs of his constituents.

I must however state in all honesty that I still love and respect Hon Gizella Tetteh-Agbotui but expect her to represent us in a manner that would attract the development the constituents need.

COVID-19: Government to announce more measures ahead of Chri...
38 minutes ago