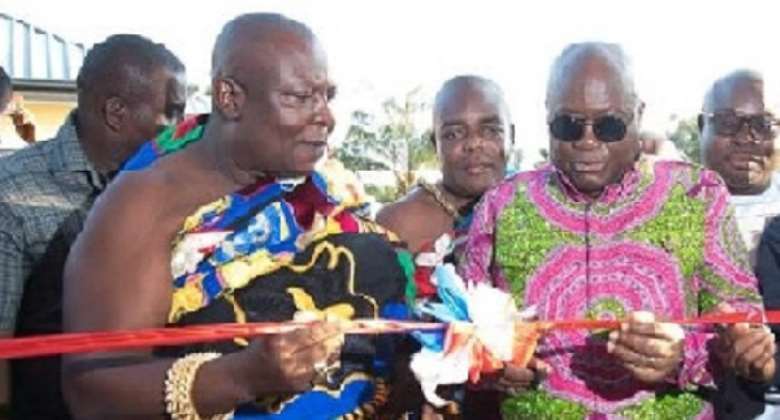 To that end, he said, persons giving literal interpretations to the President's response to the Chief following the traditional ruler’s demand for the completion of the E-block project in his area, are being unfair to the two gentlemen.

Speaking on the Key Points on TV3/3FM on Saturday October 23 with host Dzifa Bampoh, Mr Ansah said “Torgbui Fiti and the President I'm told are friends. Just recently in 2019 when the President visited Aflao , this is the Chief that commended the president for turning around the economy of the country , an economy that he met that was in bad shape , the President has turned it around.

“He commended the president for his good works especially along the borders of Ghana. So it tells you that these are persons who have some level of relationship. If you are to give a literal interpretation of what the President said, yes that will be the conclusion.

“But the facts that are coming out if the chief wanted the project completed or wants a continuity of the project , from the facts that we have gathered is a project that has moved from 23 per cent to 96 per cent . It tells you that the President is concerned and appreciates that it is his responsibility to make sure that the project is completed.

“So, jokingly saying that he should complete the project , for me, I think the president came form the point to say that the ultimatum from his good friend Torgbui Fiti to his education minister is somewhat putting a lot of pressure on him as president .

“The president himself appreciates the fact that it is his responsibility to complete that project, it is not the responsibility of the chief to do that. That is why the Ministry is ensuring that the project comes to a hundred per cent completion .

“So, let us not give a literal interpretation to what the president said. If you do that you are not being fair to the president, you are not being fair to the chief . I am happy that the chief brought this thing up , the president has given has passed a comment on it , I think it will lead to a lot of positives for the people of Aflao, I am sure in the coming days there will be a lot of attention on the E-blocks so that just as the chief said his people can enjoy the free SHS.”

Meanwhile, Member of Parliament for Buem, Kofi Adams has asked President Akufo-Addo to apologise to the Paramount Chief of Aflao following his response to him.

Mr Adams said the President was wrong in his response to the request made by the traditional ruler.

Minority members on the Education Committee of Parliament are visiting uncompleted projects in the country. They visited was in Aflao in the Volta region.

Over there they met the Paramount Chief Torgbui Adzonugaga Amenya Fiti, who then raised issues against the failure to finish the project and further gave the government a four-month ultimatum to open the e-block community day senior high school which in his view, has stalled since 2016.

The ¢9 million project which was part of some 200 classroom blocks the erstwhile Mahama administration started was supposed to have some 26 classrooms attached and 5 departments including a science block.

Torgbui Adzonugaga Amenya Fiti speaking with the Minority side of the Education Committee who toured the uncompleted school buildings in the Ketu South constituency says, government's approach to education is appalling.

“After senior high school education, the next degree that my people have to do is to go to border and go and do kayayo, no school.

“The only school that we have is the RC Senior High School that belongs to the Catholic Mission Minor Seminary. So this thick population have no place to go and people sit down in that big hall called parliament and not thinking about Aflao, a place after the Tema Harbour, the next revenue generation is from the Aflao border.

“I had to push the former President Mahama for the structure to be constructed over there. I had to be running from here to Accra begging. Should we beg for education?”

In response to the Chief's comment, President Nana Addo Dankwa Akufo-Addo who was not happy with the ultimatum given by the Chief, in a sarcastic manner, asked him to complete E-block by himself.

The President said most of the E-block projects started by the Mahama administration have been completed by his government. Others are also at various stages of completion, he said.

He said on Accra-based Peace FM Thursday, October 21 that “Many of the E-blocks are being worked on across the country.

“Is he [Aflao Chief] the one to give the minister ultimatum then he should go ahead and complete the project.”

Reacting to these comments by the President, Mr Kofi Adams said “The President's answer to the Chief is absolutely wrong , the president should not have spoken the way he did

“Torgbui Fiti doesn't take our taxes, moneys are collected even from his people in Aflao and other areas, it is lodged with government or our President , he is the Chief spending officer, the Finance minister presents the budget on his behalf.

“All the moneys that are collected including from the people Togbui Fiti superintend, is serenaded to the President to spend so fi they are saying that you have introduced a system where moneys collected from us is used to support education and because you have failed to complete infrastructure in my area, this municipality does not have a secondary school and a lot of my people are not benefiting from the policy and the response he gives is that 'is he the one to request for completion?'