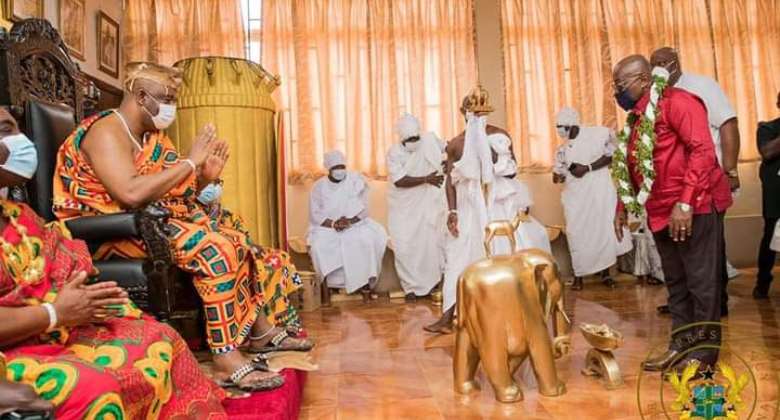 He wants the region to be called Ga Dangme region to reflect and represent the name of its indigenes.

He made the request when President Akufo-Addo paid a visit to the Ga Traditional Council at the Ga Mantse Palace in Accra today, Friday, October 22, 2021.

This was on the second day of his tour of the region as part of his nationwide tour.

Speaking at the meeting, the Ga Mantse could not help thanking President Akufo-Addo for the various developmental projects he is understaking not only in Accra but the entire country.

He also asked the President to help get more trained Ga teachers to be posted to schools in the Greater Accra region to enhance teaching of the Ga language in schools in the region.

Nii Takie Teiko Tsuru II took the opportunity to thank the President for the significant number of Ga’s he has appointed to occupy various positions in his government even though he wish they could be more.

As leader of the Ga’s, he promised to do all he can to help resolve all chieftaincy disputes in the Ga State and therefore called for the President’s continous support in that respect.

The Ga Mantse also appealed to the President to do more to help solve perenial flooding in Accra since it has become one of their major headaches as a people.

On his part, President Akufo-Addo commended the chiefs and people of Ga for finally settling on one Ga Mantse in the person of Nii Tackie Teiko Tsuru II.

He was hopeful the new Ga Mantse will be able to hold the fort and rally all Gas together in peace.

He was confident this will bode well for the Ga state and thus asked for all to support him to help develop the Ga state.

He was particularly happy all this happened under his presidency.

President Akufo-Addo to help him to develop the Ga state but was particularly his commitment to ensure lasting peace and security in the Ga state.

On the issue of the change of name of the region the President said he will consult extensively before he makes up his mind.