EU summit to load pressure on Poland over rule of law 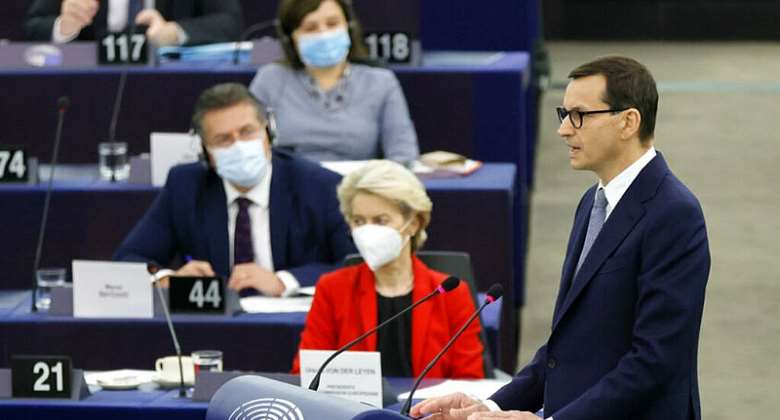 European Union leaders pressured a defiant Polish Prime Minister Mateusz Morawiecki Thursday to fall back into line on recognising that EU law trumps national decision-making, hoping that dialogue will stave off a fundamental crisis in the bloc.

Morawiecki instead painted a picture of an overbearing union treating its 27 member nations as mere provinces, taking control of even more powers while imposing its values at will against the wishes of sovereign peoples.

Facing the threat of losing out on tens of billions of EU funds because of his stance, he countered that Poland “will not act under the pressure of blackmail".

Almost all other countries countered that respecting common rules and values is essential in the bloc if it is not to unravel and lose political and economic clout in the world.

"Play by the rules"
“If you want to be part of a club and have the advantages of a club, you must play by the rules,” said his Belgian counterpart Alexander De Croo. “A red line has been breached and we cannot accept that.”

Beyond holding up Poland's access to billions of euros in help revive its economy in the wake of the pandemic, the EU's executive arm can also start infringement procedures, or activate a mechanism allowing the suspension of other EU payments to a member country breaching the principles of the rule of law.

If the sniping and accusations continue unchecked, it could turn into the biggest institutional crisis for the EU since the United Kingdom decided to leave five years ago.

"Common principles"
Despite the bellicose language by several leaders, German Chancellor Angela Merkel, a long-time champion of compromise, warned against a protracted political and legal fight that could hurt everyone, especially at a time when the bloc is trying to emerge from the biggest economic crisis in its history.

“We must find ways and possibilities to come together again on this, because a cascade of legal disputes before the European Court of Justice is not a solution,” she said.

France threw itself behind Merkel. Ahead of the summit, French President Emmanuel Macron had a brief meeting with Morawiecki. He told him he is concerned about the situation and also asked the Polish prime minister to engage in a dialogue to find “a solution compatible with our common principles and rules,” the Elysee said.

Morawiecki also appeared to shy back from some of the harsh language used in the European Parliament on Tuesday. “We are ready for dialogue,” he said. “We will of course talk about how to resolve the current disputes in agreement and in dialogue.”

He said the key quarrel was about EU claims for legal primacy in areas where he argued that the bloc does not have competence.