Jesus Ahoufe remanded, to appear in court on Monday 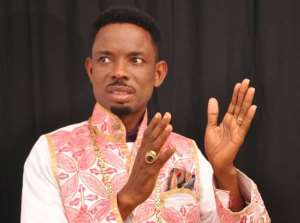 The case was presided over by Her Ladyship, Ellen Offei Ayeh.

He however pleaded not guilty.

Shatta Wale and three other accomplices were also remanded into police custody for a week on the same day.

They were remanded by an Accra Circuit Court on Thursday, October 21, 2021, on their first appearance in court.

A fourth accomplice, who is also a member of Wale's crew, was arrested on Wednesday, October 20, 2021.

Shatta Wale pleaded not guilty to the charge of the publication of false news and causing fear and panic.

His accomplices, Kojo Owusu Koranteng, Idris Yusif, and Eric Venator have been charged for abetment of crime are also to spend the next one-week in police custody.

They also pleaded not guilty to the charge.

The four persons are expected to reappear in court on October 26, 2021.

The musician and his crew members have already spent two nights in police custody as well as the pastor.

Shatta Wale was arrested on Tuesday after the police announced that they were looking for him over his involvement in the spread of false information that he had been shot at East Legon in Accra.

Prior to his arrest on Tuesday, he apologized to his fans and people who had been affected by the prank in a Facebook post.

Latest Photo Reports
Catch up with all the political quotes from our politicians.
Advertise here
More Headlines
ModernGhana Links
Thank you for the wonders of Ghanaian culture, tradition — South Africa's Ramaphosa to Akufo-Addo
Ashantis like NDC; we will target 40% votes in 2024 – Kwabena Duffuor
You told Ghanaians we are not in normal times so why impose elegy? — Group questions Akufo-Addo
PHOTOS: Hundreds of workers stranded at Lapaz as commercial drivers begin strike
‘Don’t travel outside this month’ – Nana Addo ban Ministers and deputies who’re MPs
Akufo-Addo to launch 2021 Anti-Corruption Week
Kumasi fast losing its agrarian lands, farmers forced to plant in containers
My people have benefitted tremendously from your policies — Ya Na to Agric Minister
South African President describes travel ban over Omicron variant as apartheid
TOP STORIES

Thank you for the wonders of Ghanaian culture, tradition — S...
2 minutes ago