You conducted worst election in 2020, use 2024 to redeem yourself – Mahama to Jean Mensa 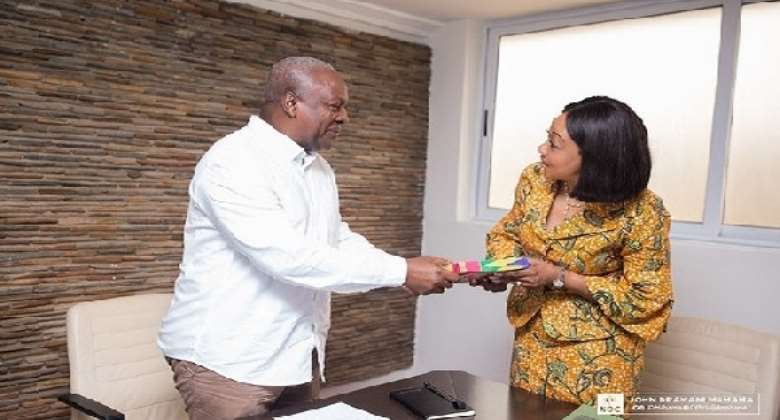 Aside that, he alleged that the EC had a mindset to rig the polls for government.

The former President’s comment comes after the EC parted itself on the back for conducting a free, fair, transparent poll that saved the country some GHS90 million despite the challenges of covid-19 in 2020.

Addressing the opening ceremony of the high-level parliamentary seminar on: “Two decades of democratic elections in ECOWAS member states: Achievements, challenges and the way forward”, in Winneba, EC chair Jean Mensah listed the successes of the 2020 polls such as a reduction of the cost of the election from $13 per person in 2016 to $7.7 in 2020.

Moreover, she said the EC also cut down the time it took a voter to vote from 10 to 12 minutes per voter to three to five minutes.

She said the EC had only six months to conduct the elections, and that within that short space of time, “we completed every electoral process, including introducing and deploying a new Biometric Voter Management System, comprising hardware and software, and preparing a new biometric voters register”.

“This and other electoral processes were undertaken within a space of six months, from June 30th, when we started the registration exercise, to December 9th, when we declared the results,” she stated.

Mrs Mensa said in spite of the fears and projection of a low turnout as a result of the COVID-19 pandemic, the EC compiled an entirely new biometric voters register in 38 days only, successfully registering over 17 million eligible Ghanaians in that short period of time and exceeding its initial target of 15 million registrants.

“The efficiency of our coverage in the voter registration exercise has been attested to by the recently released population census figures that place Ghana’s population at 30.8 million. The 17,027,000 voters on the register represents 55.2 per cent of the population of Ghana; a percentage that fully meets international standards for the registration of voters.”

She said Ghana proved that electoral processes in West Africa could be transparent, as all the electoral activities were conducted in the full glare of the public.

But speaking in an interview on Global FM on Monday, 18 October 2021, as part of his ‘Thank You’ tour in the Volta Region Mr Mahama said the EC did a poor job and urged the commission to use the 2024 polls to redeem its image.

He said: “2020 is the worst elections we’ve ever had. We’ve never had an election where eight people have been shot in the process and killed and you say that it’s the best election?

“We’ve had election over and over again, people go, we go through the process we’ve not had people killed in the process and so that’s not acceptable.”

“So if you have an EC commissioner, if you notice what happened at Ayawaso West Wuogon and people were shot and wounded and I look at her at the Emile Short Commission and they ask her about violence in the election and she said they didn’t see any violence, so she’s got a mindset towards rigging the election for [NPP],” Mr Mahama noted.

The former President bemoaned that “you have an EC commissioner who says the NDC is an existential threat to Ghana’s democracy and yet that EC commissioner is still on the commission and making decisions in respect of fair elections, it just shows the kind of EC we have”.

According to Mr Mahama, the EC “should not go praising themselves, they conducted one of the worst elections and I’m saying I don’t have the power to remove them and so they’ll be the EC commissioners for 2024 but they should use 2024 to redeem themselves…”