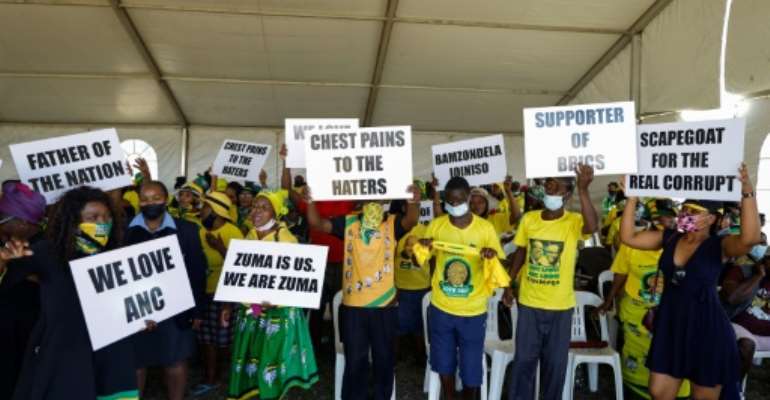 Zuma, 79, was released in early September but has not appeared in public since. By GUILLEM SARTORIO (AFP)

The crowd moved as one under a sweltering sun Thursday in South Africa's port city of Durban to pray for ex-president Jacob Zuma and welcome his release on medical parole.

Officially, no one knows where the 79-year-old is serving his parole, granted two months into a 15-month prison sentence for contempt of court.

He was released in early September, but has not appeared in public since then.

Even Thursday, he appeared only via video link to his supporters -- after many had left because of heavy winds ripping through the People's Park near Durban's beachfront.

"Today I wish to address my gratitude for your support and prayers," Zuma told the event organised by his foundation.

"As a prisoner of the democratic state in which the black majority controls the levers of state power, the fact that you have come to support me with prayers means a lot to me."

Zuma's rambling, hour-long speech was his first public address since his release.

He lambasted the judiciary for ordering his imprisonment and criticised the graft investigations against him.

But he also urged South Africans to vote for the African National Congress, the party he once led.

Zuma's supporters had hoped their "Zulu brother" would make an appearance.

"He won't disappoint us, he won't as always," said Khumbulani Ngom, who had travelled from a township outside the city for the event.

Religious leaders speak at the prayer session for Zuma. By GUILLEM SARTORIO (AFP)

But Zuma appeared only on a screen, with the sound drowned out by the wind.

"I remain a prisoner under very strict parole conditions," he said. "It feels like what house arrest and burning orders must have felt like during colonial apartheid government."

According to rumour, Zuma is serving his sentence at his $17 million estate in rural Nkandla, some 200 kilometres (125 miles) inland.

South Africans head to the polls on November 1 to elect councillors for more than 250 municipalities across the country.

The vote will test the ANC's weakening popularity in the face of infighting and deadly unrest that followed Zuma's jailing in July.

Diehard Zuma supporters were joined by ordinary citizens in ransacking shopping malls and warehouses in Johannesburg and around Durban's KwaZulu Natal province.

The riots -- the worst violence since the end of apartheid -- killed at least 350 people and dealt a crippling blow to the economy.

President Cyril Ramaphosa, who succeeded Zuma in 2019, called it an attempted insurrection.

This prayer is about "asking God to continue protecting President Zuma and keeping him safe from the dark forces that want to finish him," his foundation said in a statement.

"Jacob Zuma is our commander and will always be," said veteran Frank Dlamini, 55.

"We were ready to fight and die for our country. So is Mr Zuma," he told AFP.

He then fled into exile and became the ANC's feared head of intelligence, before returning as white-minority rule came to an end.

"He's too old to be in jail and arrested. If they don't free him, I'll do something for him," said Lungiswa Mgidi, a traditional healer attending the prayer meeting.

In addition to the contempt ruling, Zuma faces trial for alleged corruption linked to an arms purchase when he was deputy president in the 1990s.

He failed to appear in court for the last hearing in September, raising ire among prosecutors who argued that ill health did not justify his absence.

His no-show on Thursday was also strongly felt.

After leaving his supporters waiting for hours in the sun, the screen broadcasting his remarks was obscured as the racing wind kicked up sand.

Not many had stayed to listen.