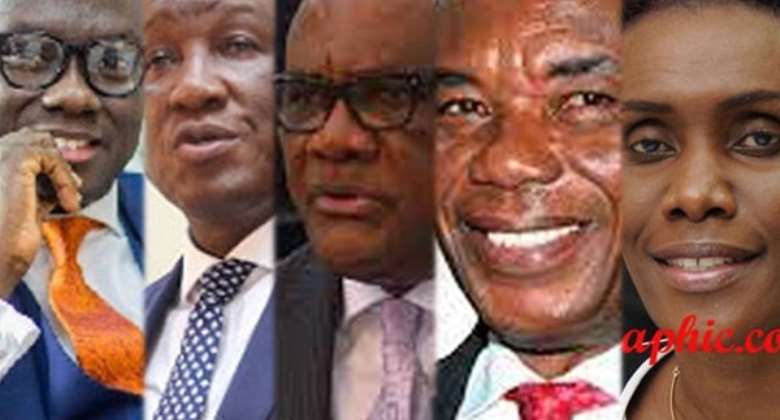 The Herald newspaper has reported that Chief Justice Kwasi Anin-Yeboah has empanelled two new judges to join the Supreme Court’s ordinary bench for the hearing of the attorney general’s review application through which the state is praying the apex court to overturn its own earlier decision to remove one of its colleagues, Justice Clemence Jackson Honyenuga, from Stephen Opuni-Seidu Agongo criminal case.

The two new judges, according to the paper, are Nene Abayaateye Ofoe Amegatcher and Prof Emmanuel Nii Ashie Kotey.

They are to join their five colleagues to hear arguments from state prosecutors and the defence teams of Dr Opuni and businessman Agongo, to ascertain whether or not Justice Honyenuga had, indeed, been biased, as declared in the 3:2 majority decision of the ordinary bench some weeks ago.

This is not the first time the state has availed itself of the right to file for a review at the Supreme Court.

There was an instance in the Tsatsu Tsikata v. the Republic of Ghana case under President John Agyekum Kufuor, during which now-President Nana Akufo-Addo, who was the Attorney General and Minister of Justice at the time, filed a review application, just as has been done by his Attorney General Godfred Dame in the Opuni-Agongo case, to overturn a decision by the Supreme Court which did not favour the government at the time.

The ordinary bench, presided over by Justice Jones Mawulorm Dotse, on 28 July 2021, upheld Dr Opuni's prayer for the removal of Justice Honyenuga from the case, in which he and Mr Agongo are being tried for causing the state to lose some GHS271 million through fraudulent means in the procurement of fertiliser for Ghana Cocoa Board.

The three Supreme Court Justices in the majority had asked that the case be given to another trial judge to handle but the Attorney General argued that redoing the case from the scratch will put a burden on the coffers of the state.

Justice Ashie Kotey and Amegatcher, like Justice Honyenuga, were appointed by President Akufo-Addo in 2018 to the Supreme Court.

Justice Kotey had been active in academia, lecturing at the University of Ghana's Faculty of Law after leaving the Forestry Commission as Chief Executive under President Kufuor from 2007 to 2009 when the John Evans Atta Mills administration took over the reins of affairs.

Nene Abayaateye Ofoe Amegatcher, on the other hand, has been a private legal practitioner, although he has been teaching, too, as a senior lecturer at the Ghana School of Law since 1994.

Justice Amegatcher, from 2012 to 2015, served as president of the Ghana Bar Association.

Prior to his appointment to the Supreme Court, he was the managing partner of Sam Okudzeto and Associates, the law firm of a founding member of the governing New Patriotic Party (NPP), Mr Sam Okudzeto, who is also a member of the Council of State, serving as an appointee of President Akufo-Addo.

The insistence of the Attorney General that Justice Honyenuga continue hearing the case despite the Supreme Court ruling compelled the main opposition National Democratic Congress (NDC) to hold a press conference at which it accused the government of shopping for a particular judge to convict Dr Opuni and Mr Agongo.

Addressing the media in Accra on 30 August 2021, the National Communications Officer of the party, Mr Sammy Gyamfi, accused the Attorney General and Minister of Justice of "headhunting" for a judge.

This, Mr Gyamfi said, flies in the face of natural justice and would gravely undermine public confidence in the performance of Justice Honyenuga, who sat as additional High Court judge, if he returns to preside over the case.

The opposition party has maintained that the case is a political witch-hunt by President Akufo-Addo and the NPP.

Justice Honyernuga was promoted by the President from the Court of Appeal to the apex court while presiding over the same case.

Ahead of his elevation, Justice Honyenuga had stoked controversy in the run-up to the 2020 general elections when he, at a durbar of chiefs, endorsed President Akufo-Addo for a second term.

Reading from a written speech, the then-Court of Appeal judge, who doubles as the Paramount Chief of the Nyagbo Traditional Area under the stool name TorgbuI Nyagasi V, told the president at the durbar in Nyagbo that: "We wish to congratulate you for the excellent manner you are governing this dear country of ours. It is our hope that with your vision and the gains made in your first term, Ghanaians may consider giving you another four years".

The president was on a three-day tour of the Volta and Oti regions in February 2020 when the incident happened.

The opposition NDC and other critics condemned the judge for the endorsement.

Among the critics was the editor-in-chief of the New Crusading Guide, Abdul-Malik Kweku Baako, who called for the Justice’s withdrawal.

At the NDC’s press conference on the AG’s recent review application, Mr Gyamfi told journalists: "In fact, most of the cases of criminal prosecution against some officials of the former NDC regime [that] the NPP keeps bragging about … are beginning to crumble like a pack of cards right before their very eyes".

"What we are seeing is a desperate regime, which is not interested in upholding fair trial and the interest of justice but determined to do everything possible under the sun to convict former NDC government officials at all cost for cheap political goal-scoring", he alleged.

"Classical examples that highlight this fact", he noted, include the case against former SSNIT boss Ernest Thompson, "which has been dismissed by the Supreme Court on grounds of defective charges and also the case against the former CEO of COCOBOD, Dr Stephen Opuni and [businessman] Alhaji Seidu Agongo".

According to the lawyer, "in the case of the Opuni trial, even after the Supreme Court of the Republic has prohibited, barred the trial judge, Justice Honyenuga from presiding over the case on grounds of his manifest prejudice and bias against the accused persons, the attorney general and minister of justice, Godfred Yeboah Dame, who is supposed to advance the interest of justice in all cases, wants the judge reinstated on grounds that starting the case de novo – afresh – will be at great expense and cost to the state."

"This is the most unfortunate statement I've heard from an attorney general in my life and it is a slap in the face of fair trial and administration of justice," Mr Gyamfi argued.

He wondered why the AG was so obsessed with having Justice Honyenuga on the case.

"There are about four high court Justices, four high court judges at the criminal division of the high court but, for some reasons, Justice Honyenuga, then-Justice of the court of appeal, was given a special warrant to preside over the prosecution of Dr Stephen Opuni and Seidu Agongo".

"A few months after that, Justice Honyenuga was promoted to the Supreme Court by President Akufo-Addo", he observed.

In Mr Gyamfi's view, Justice Honyenuga has shown open bias against Dr Opuni and Mr Agongo, which makes him unfit to continue hearing the case.

"This is the Justice Honyenuga, a judge, who, during the 2020 election campaign, publicly endorsed and campaigned for a second term for President Akufo-Addo when he visited his palace".

"We are talking about the judge, who, in his ruling on a submission of no case, decided to exclude from the evidence on record, as many as 18 exhibits that vindicate the case of Dr. Opuni and the other accused persons and which were tendered through prosecution witnesses without any objection whatsoever, from the prosecution," Mr Gyamfi listed.

He said: "The insistence by the Attorney General to have Justice Honyenuga continue with this case suggests that the attorney general is desirous of having his own preferred judge preside over a case that he is prosecuting".

"This singular conduct", Mr Gyamfi warned, "has the tendency to completely erode public confidence in the judiciary as an independent arm of government".

"The simple questions [that the] government and Godfred Dame must answer are: Why must Justice Honyenuga preside over the Opuni trial at all cost despite the clear prejudice and bias he has exhibited against the accused persons? Is he the only judge in Ghana who can preside over that case? And more importantly, why must fair trial and justice, truth is sacrificed on the altar of cost? Can Godfred Dame sell his liberty for money?"

"So, when people's liberties are at stake, a fair trial is at stake, justice is at stake, you are telling us that [even though] the Supreme Court says: 'This judge has shown bias; we are barring him even though he is our colleague, he cannot preside over the case', you are telling us that: 'Oh, my Lords, if you do that, we have to start afresh; it will cost us money, so, let him come and [sit on the case]'."

"I mean, where in the world did you hear this from somebody who is not just an attorney general; that is: he's not just a lawyer for the government but he's also a minister of justice and, therefore, must be interested in justice for all citizens?" Mr Gyamfi wondered.

"Clearly", he noted, "Godfred Dame is engaging in head-hunting for his preferred judge in the Opuni trial for an outcome that should be obvious to any objective mind", adding: "Most of the criminal cases against former NDC appointees that the NPP will have us believe are evidence of their commitment to the fight against corruption, are cases of persecution and not prosecution".

"As such, these cannot and should not be believed as evidence of any genuine commitment to the fight against corruption", Mr Gyamfi said.

He said it would also conscientise the public that the justice system was capable of holding its own to account whenever they erred.

He added that the decision will go a long way to help promote public confidence in the country's justice delivery system.

"This ruling tells you that even the Supreme Court has no problem prohibiting one of their own, and this is a strong message to all Ghanaians and the business community as well," he said.

Following the 3-2 decision of the Supreme Court, a private legal practitioner, Mr Martin Kpebu, described it as "sound and useful".

Mr Kpebu said the "landmark decision" by the court was very rare but positive for public confidence in the judiciary system.

The legal practitioner said the decision demonstrated that even the Supreme Court, which is the highest court of the land, was allowed to hold the scales of justice evenly balanced between the state and an accused person.

"In this particular case, the Supreme Court has had to prohibit one of its own and for me, to the extent that the Judge is one of their own and still being prohibited, tells you that the Supreme Court is really up to the task," he said.

Mr Kpebu said the decision meant that the case would have had to begin from the scratch, with the accused persons taking their pleas after the state had filed its processes afresh.

Dr Opuni and Alhaji Agongo, the CEO of Agricult Ghana Limited, an agrochemical company, are on trial on the accusation of causing financial loss of more than GHS271 million to the state.

Mr Agongo has been accused of using fraudulent means to sell substandard fertiliser to COCOBOD for onward distribution to cocoa farmers, while Dr Opuni is accused of facilitating the act by not allowing the businessman’s products to be tested and certified as required by law.

The two have denied any wrongdoing and pleaded not guilty to all the charges.