'Too much water': floods wreak misery in South Sudan 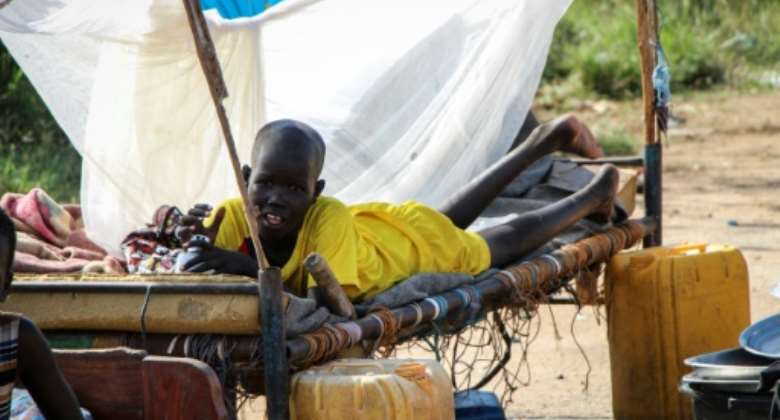 The floods have affected and displaced around 426,000 people across the country, according to OCHA. By Peter Louis GUME (AFP)

Children's textbooks, utensils, clothing and crops: all lost to rising floodwaters that have forced tens of thousands of people in South Sudan to leave their wrecked homes as overflowing rivers deluge farmland and swallow up livestock.

Barely 16 kilometres (10 miles) from the capital Juba, the devastation is apparent, with locals surrounded by water as they try to feed their children and find a safe place to sleep.

"The water is too much," a visibly distressed Sabina Nene told AFP.

"The rain came and drenched us (overnight)," the 30-year-old widow said, as she attempted to dry maize (corn) to prepare porridge for her four children.

Like thousands of other farmers stranded by the downpour in the suburb of Kworjik, she now uses flood water for all her family's basic needs, including for drinking and cooking.

Too exhausted to worry about the health risks, other concerns weigh on her mind.

"We want tents, this is the first thing. We want mosquito nets because the mosquitoes are too many and disturb us," she said.

Kworjik official James Subek Pitia told AFP that at least 9,000 locals were affected by the floods there. That is a fraction of the 426,000 people reeling from the disaster across the world's youngest country, according to the UN's emergency response agency.

Families set up makeshift camps along a highway, grabbing what few possessions they could from the wreckage of their homes. By Peter Louis GUME (AFP)

Emergency workers have used canoes and boats to reach cut-off populations, the United Nations Office for the Coordination of Humanitarian Affairs said in a briefing note last week, warning that more heavy rains and flooding were expected in the coming months.

Some families fled Kworjik for Juba, local resident Albert Alsayo Laku told AFP, while others have taken shelter in churches and in a handful of tall under-construction buildings that managed to withstand the deluge.

The disaster came a year after record floods affected some 700,000 people in the East African nation. By Peter Louis GUME (AFP)

But the majority stayed back or set up makeshift camps along a highway connecting Kworjik with Juba, grabbing what few possessions they could from the ruins of their flimsy thatched huts.

"We want the government to come to our rescue and relocate us from this place," said Laku, who has 11 children.

The disaster, which has also damaged health facilities and schools, came a year after record floods affected some 700,000 people in the East African nation.

Around 100,000 of those displaced last year have still not returned home, according to OCHA.

In some parts of the country, conflict has complicated efforts to help those in need, with UN teams struggling to get aid to some 25,000 people in Warrap, a northwestern state plagued by ethnic violence.

OCHA last month warned of limited supplies and a cash shortfall, saying that it had received only 54 percent of the $1.7 billion required to pay for programmes in South Sudan.

The UN's World Food Programme said earlier this month that it has suspended food aid to over 100,000 displaced people in the country, warning of further reductions unless it receives more cash.

Four out of five of South Sudan's 11 million people live in "absolute poverty", according to the World Bank in 2018, while more than 60 percent of its population suffers from severe hunger from the combined effects of conflict, drought and floods.

'We will stand united to oppose e-levy' – Haruna Iddrisu but...
11 minutes ago