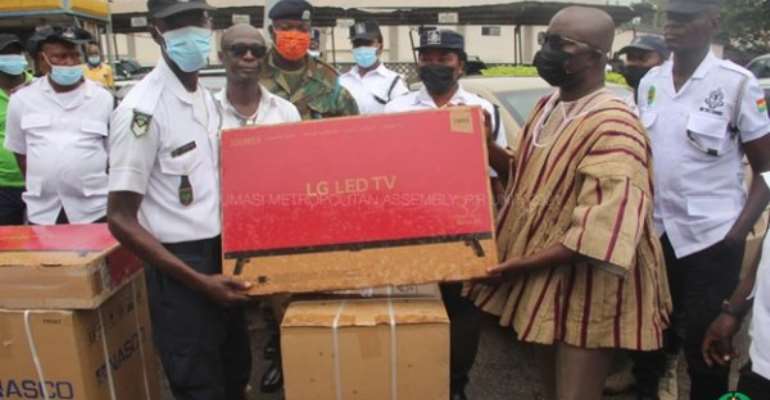 Osei Assibey-Antwi, the out-going Kumasi Metropolitan Chief Executive (MCE), has asked the metropolitan guards to be diligent, honest and committed to their duties.

They should at all times abide by the ethics binding their work to ensure sanity in the maintenance of law and order in Ghana's second-largest city.

According to the out-going MCE, promoting discipline in the society was one critical component of the terms of reference for the guards, and as such it was expected of them to avoid practices likely to bring their image into disrepute.

Mr. Assibey-Antwi made the call in an interview with the Ghana News Agency (GNA) in Kumasi, after the KMA honoured two metropolitan guards and three environmental health officers for dedicated services.

Constable Abena Adutwumwaa and Constable Anthony Gundad, in recognition of their hard work, have been promoted to the rank of Senior Metropolitan Guard.

They were each presented with a refrigerator, 32-inch television, pair of boots and an undisclosed amount of cash, while the environmental health officers received cash.

The award-winners received the honour for the crucial role they played in exposing a syndicate involved in the sale of unwholesome meat in the Kumasi metropolis.

Mr. Assibey-Antwi lauded the metropolitan guards and environmental health officers for their vigilance.

He said they must take inspiration from the awards and resolve to work harder in the discharge of their duties.