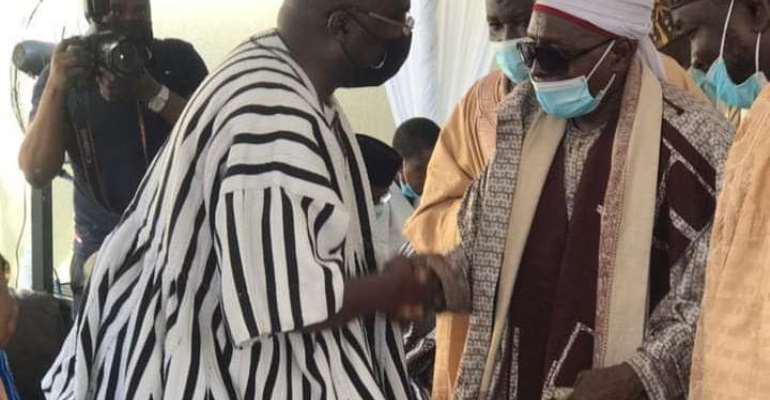 The Greater Accra Zango Chief, Meimartaba Sarki Alhaji Yahaya Hamisu Bako and his Cabinet on Sunday, September 19, 2021, paid a courtesy call on Vice President Dr. Mahamadu Bawumia to commiserate with him on the loss of his mother Hajia Mariama Bawumia.

The Chief offered a special prayer for the mother of the Vice President and call on Allah to have mercy on the soul of Hajia Mariama Bawumia.

He was accompanied by some of his eminent sub-chiefs which include the Chief of Odorkor Official Town Nyamekeye, Chief Adnan Musah Alhassan; Chief of Agape Gonse, Emir Sherif Adams; Chief of Darkuma Zango, Chief Umar Yehuza, and among other prominent Counsellors and advisers.

Hajia Mariama Bawumia died in Accra in the early hours of Monday, September 13 at age 82, and was buried at her hometown on Tuesday, September 14, 2021.

This came to light when the Greater Accra Zango Youth Chief, Alhaji Yerima Salim Ango took to his Facebook page to share pictures of the Chief's visit to the Vice President at his residence in Accra.

In a related development, the Greater Accra Zango Youth Chief use the opportunity to call on Zango youths in various political establishments to make their positions reflect on the ordinary Zango Youth.

He further called on the Zango Youths to empower themselves with the needed qualification in order to get a political appointment to better and develop the Zango communities.

This he said will encourage any political leader to appoint more Zango youths to contribute towards nation-building.

Akufo-Addo government most lawless Ghana has ever had – Nyah...
44 minutes ago