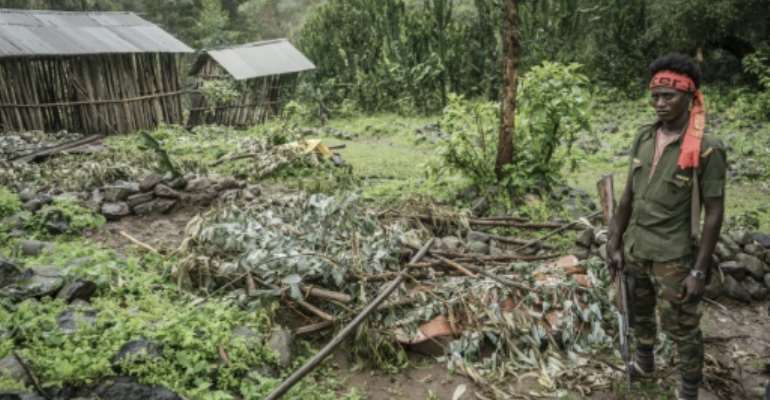 An Amhara militiaman stands near a mass grave for victims of an alleged massacre in the northern Ethiopian village of Chenna. By Amanuel Sileshi (AFP)

Bodies of rebel fighters dot the roads and fields leading to Chenna, a village in the mountains of northern Ethiopia that this month saw one of the most gruesome reported incidents in the country's 10-month-old war.

Last week, the government accused the rebels, the Tigray People's Liberation Front (TPLF), of massacring as many as 200 civilians in Chenna, including women and children. Medics put the death toll at 125 but told AFP it could climb.

The TPLF rejected the allegations, while accusing Prime Minister Abiy Ahmed of sending "priests, women and children" into battle as cannon fodder.

Chenna is located in Ethiopia's Amhara region which lies south of Tigray, where fighting broke out last November between pro-government forces and the TPLF.

A boy walks in the fog near Chenna, which people have fled since the mass killings. By Amanuel Sileshi (AFP)

Despite Abiy vowing a swift victory, fighting has spread in recent months into the neighbouring regions of Amhara and Afar, displacing hundreds of thousands of people and killing an untold number of civilians.

The violence in Chenna unfolded in early September, and the village -- a rambling collection of mud homes -- is now mostly empty, its residents driven away by the stench of death.

'We haven't buried all the people. We have been burying our people who have been massacred. We were doing that for four days straight," Amhara militia fighter Yalew Kasse told AFP on Tuesday.

Stones and leaves have been placed over a freshly dug mass grave outside the village's Orthodox Christian church, and militia fighters said the graves of still more civilians could be found elsewhere, sometimes right outside their homes.

"They annihilated one whole family: a mother, a father, a four-year-old boy and a six-year-old girl," Yalew said.

Mebratu Adane, a spokesman for a local militia, said most of the bodies that have not been buried were those of TPLF rebels.

"The villagers couldn't stand the smell of the bodies so they fled," he said.

AFP has not been able to independently confirm the number of victims or verify whether any of the civilians reportedly killed in Chenna might have been combatants.

Spent bullet casings litter the ground near a mass grave in Chenna. By Amanuel Sileshi (AFP)

The fighting in Amhara has amplified global concern about the war in northern Ethiopia, which has killed many thousands of people and pushed hundreds of thousands into famine-like conditions, according to the United Nations.

"Even with the changing dynamics in the conflict, there has been one constant: multiple and severe reports of alleged gross violations of human rights, humanitarian and refugee law by all parties," she said.

Outside efforts to broker talks have made no visible headway, meaning more intense fighting is likely in the offing.

Ethiopian soldiers conduct weapons and fitness drills in the town of Dabat. By Amanuel Sileshi (AFP)

In Dabat, a town southeast of Chenna, Ethiopian soldiers conducted weapons and fitness drills on Tuesday while preparing to push farther north.

"We'll beat the junta," the soldiers sang as they marched through the streets of Dabat once the drills were over, using a pejorative term to refer to the TPLF.

'We are planning to go to the north and destroy the junta, and we are well prepared," said Colonel Eshetu, who gave only his first name.

"We have been training for more than three weeks," he said. "Our soldiers are more than capable of destroying the Tigray rebel force."