Swearing to the truth 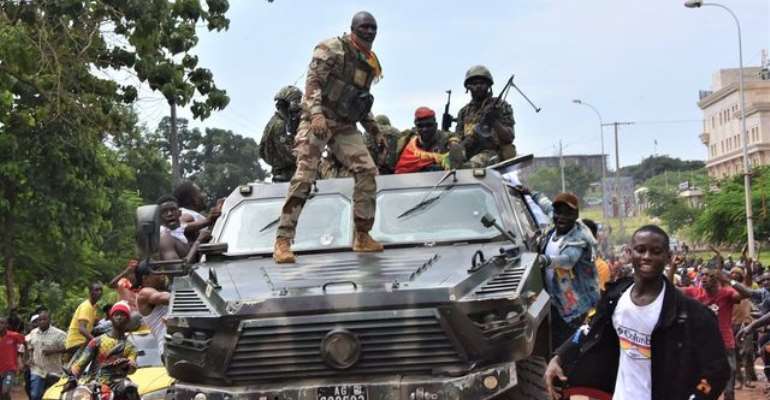 Real politics should be about visions, moral values and strategies of their most effective implementation considering the national interest in the face of the world. But it is mostly never.

The military coup in Guinea last week has sparked joy in the hearts of locals and heavy criticism by African leaders and leaders of the white men's countries. What matters foremost is the view citizens have in its entity about their brothers and sisters in uniform actions as a country first has to stand and be responsible for its affairs no unwanted advice is needed once the overwhelming majority of people express their sincere support and happiness.

Military officers are citizens in uniform trained to perform their duties in the national interest, not in defending political parties and their interests. Democracy in Africa is seen in many cases the rising of good minded military officers against elected politicians having exposed their selfish corrupt minds during being in power. In most of these cases (not all!), they are the real protectors of national interests (quotation by Alberta Heerde, my wife, Ashanti from Kumasi/Ghana).

In France, someone can only become the CEO of a multinational company having studied the foremost political sciences and philosophy. In Germany, high ranking military officers have studied political sciences or history at the various universities of the German army.

In Africa, military officers are mostly trained for their needed skills to fight in combat. Most of them understand the importance of politicians to rule and take over after a coup has successfully brought about peace and stability in the country.

The critical question is who to choose and entrust the nation with to have a blessed future with. Another one of their borns, raised and be educated in the blood of the overthrown democratically elected regime is the open gateway for another coup in due time.

Only a local generation raised by minds able to stand firmly independently with years of personal and professional development and experience never been touched by the spirits of generations past that have messed up the nation will eventually turn around the country and its people to be a good place to live in for most of them and generations to come.

Latest Photo Reports
Catch up with all the political quotes from our politicians.
Advertise here
More Opinion
ModernGhana Links
The leakage of the 2021 MMDCEs vetting committee report; a misrepresentation of the wish of the Sissala West people
Ghana: Experimental Bloc Of Real Democracy – Antwi-Danso
Did Ghanaians indeed misconstrued Mahama's do-or-die "idiomatic expression"?
John Mahama’s battle cry!
69 is 'Do or Die' age — Amb. Abdul-Rahman Harruna Attah celebrates birthday
WAEC and WASSCE: Solutions to the perennial examination leakages
PNC ‘Fight’ Lands In Police Station
2024 is Do or Die, We Don't Owe Anyone Any Explanation Or Apology
Do Or Die; Mahama - Dr. Ren Writes...
TOP STORIES