Nothing has Changed! Bawumia’s “Glory to God” and the NCI’s GhC50,000 “Donation” 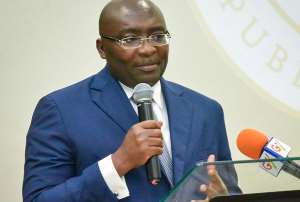 I wish I could say I feel sorry for God. No, I can’t, because I dare not. God is beyond that and it is His pity for us, that all those who believe, supplicate for, and God knows, we do need His pity. Considering all the things we can, and do get up to, all in His name, like a cathedral of doom, God is indeed a very tolerant God.

Two posts of interest landed on my WhatsApp early this week. One was a newspaper story showing Alhaji Dr. Mahmoudu Bawumia “rallying” for their so called “national” cathedral. The other, a video clip with him telling an audience who, whose loyalty he could rely on why he supports the cathedral, because, to him, it is to the “Glory of God”. Did he actually say that? Yes, he did! Was that what the elections (2016/2020) were about? A cathedral, ahead of our vital gari and beans needs?

Poor Alhaji Dr. Mahmoudu Bawumia, we are in a secular democracy with a plural freedom of worship constitution, so he does not have to entertain the fear of any religious leader pronouncing anything on him. That alone is reason enough why our secular constitution, separating state from religion, needs grooming, defending and promoting. The inference here, I’m sure is clear…The only fear he has is the fear of his political boss, Nana Addo Dankwa Akufo-Addo, for whose sake he would come out and piteously whine about his love of a sectarian cathedral, which he claims is to the “Glory of God”! The man did not come across as a person with any integrity. He did not sound convincing at all and even the applause that followed was scattered. Alhaji Dr. Mahmoudu Bawumia and Ambassador Alhaji Abdul-Rahman Harruna Attah, MOV, these two gentlemen love their honorifics, especially the Alhaji. I am not much into the wearing of “patakaris” and “jalabias” to prove or disprove anything, but my young compatriot’s love of that kind of sartorial splendor is now unassailable. It is this issue of the cathedral of doom being to the glory of God coming from him, that has got me squirming with disbelief – for those with a penchant for finding puns, that’s one for you.

And now, Alhaji Dr. Bawumia, let us polemicize on the glory of God:

*We are here compelled to ask, whose or which God?

*What is there that glorifies the name of God in taking land that does not belong to you – in fact public land? As a child, I was taught that taking something that did not belong to you is stealing. Growing up, I learnt of quite a number of synonyms describing that kind of behavior, the most popular being thief. You are a thief! No glory in that, either to yourself or especially to God.

*What is there that glorifies the name of God when buildings, at great cost to the already overburdened taxpayer are razed to the ground? I believe that fits in nicely with causing financial loss to the state, something that has sent and continues to send people to jail.

*What is there that glorifies the name of the lord in unaccountable fundraising capers, nudging the frontiers of fraud, extortion and swindling.

*Where is the glory to the name of God when lies and other untruths are employed in justifying the cathedral as in the attempted “equalization” in the case of the new mosque versus the “national” cathedral.

*What is it that glorifies the name of God when you insist on pushing through a project that is not in the interest of the entire nation, with large swathes across all the faiths saying NO?

*What is there to glorify the name of God when the needs of the poor and underprivileged are sacrificed for a multi-million-dollar sectarian egotistical building?

*What is there to glorify the name of God when other faiths do not feature? Where are the Moslems? Where are the custodians of our land, like the Wulomos, Tindanbas, the keepers of the Okomfo Anokye legacy, etc.? So you see, it is not national.

The notion that the Creator of our universe and more, needs a man-made structure as a sign of appreciation is a shameful excuse to waste public resources that could serve citizens better – with Covid 19 compounding things. The balance and the level of religious tolerance that gives Ghana an almost unique atmosphere of cohabitation, greatly appreciated by us and admired by others, is under threat from this delusion of grandeur! Talking of delusions of grandeur, just take a look at Rome’s basilica replica put up by the late Ivorien president, Felix Houphoet-Boigny, a complete waste of his nation’s resources. He is dead and gone, but his country is still mired in poverty, under-development and often bloody societal/political disruptions. Nobody uses it, decades down the line! It died with the death of the man whose megalomania built it, just as this Ghanaian version is being forced down on us. Professor Kofi Awoonor saw it coming a decade ago as the “Cathedral of Doom”!

As I was completing this syndication, the entire issue of the cathedral of doom was blown wide open with the announcement that the National Chief Imam (NCI) had donated a certain amount of money towards the Nana Addo Christocentric edifice. As a citizen, it is his prerogative and he should not be denied the right of expressing it but then, other citizens should not also be denied their rights to “like” or “dislike” – apologies to social media jargon. But I do not agree with him and his gesture is not representative of all of Ghana’s Muslims. With his centenarian years, he has been ennobled and his advisors should have insulated him from acts that would sully his reverential status. Now they have opened him up to the barbs of society, which is unfair. His advisors have done him no good. I remember many years ago, this same kind of misadvise led him to be a guest at an event in which the organizers insensitively made him present an award related to one of Ghana’s breweries. I was there! The embarrassment was deep, undeserved and unfair!

Not surprisingly, with this most recent faux pas, the social media has been agog and my WhatsApp has lit up with many comments, a few of which I share below:

*“The National Chief Imamship is a creation of the Rawlings Era. For a long time after its creation the various imams especially in the North were independent of the office.”

*“Christian denominations like the Catholic Church have more resources than Muslims. Have they made any such a donation? This donation is coming straight from Jubilee House and specifically Dr Mahmud to bolster his image before the church.”

*“Ahl Sunna only tolerates him but do not defer to him on issues of creed or rituals. They follow the Wahabi Salafist puritan version whilst the NCI goes on the more permissive and mystic inclined Sufi school.”

*“His Muslim umma are suffering and beggars on the street and he has that amount to donate for building of a cathedral or he is also doing politics.”

*“For sure. I don't think the Honourable Chief Imam will cheapen himself and donate for this type of project. His advisors will have even kicked against it.”

*“I have always held the position that whereas Late Alhaji Aliu Mahama was a thorough bred Muslim before coming into politics, our younger brother [Bawumia] found Islam when he came into politics. His appreciation of the religion remains pedestrian at best and warped at the extreme.”

*“Nothing against the learned Chief Imam but this could have been put to better use serving the needs of the poor and the less fortunate. I am sure they have more than enough money for the questionable project…Need to set our priorities right.”

*“Is this supposed to encourage Muslims or what? I am Christian/Catholic and I still do not see any value in the project. Nothing has changed.”

It is with sadness that I repeat the following from my last syndication: “Chatting with a friend recently on this subject, he asked me if I was not aware that just like many things in Ghana these days, political partisanship has hit the Muslim community. We both laughed at that but knew deep down within us that it could be possible.” We’ve been proved right. Sad. Oh Nana Addo! The chief divider, anything he touches must perforce end in division. Yet again he has thrown a cat into the coop!