Ex-offenders should be made prison wardens in South Africa. Here's why

By Casper Lӧtter - The Conversation 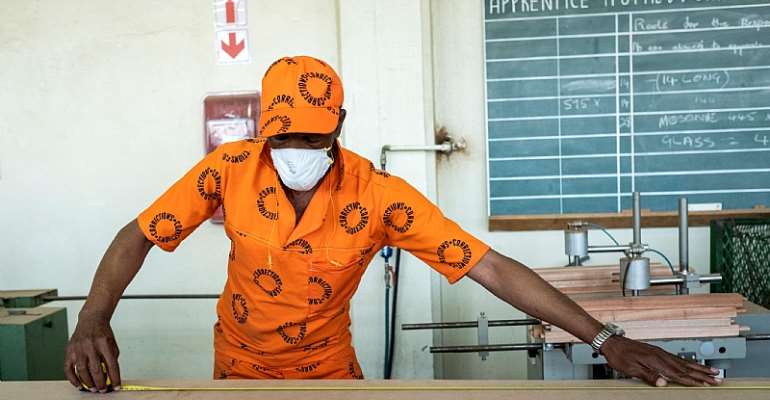 An inmate busy in the woodwork area of The Leeuwkop Correctional Facility. - Source: WIKUS DE WET/AFP via Getty Images

Appointing former prisoners – or ex-offenders – as prison wardens is an international trend in corrections from which South Africa's Department of Correctional Services can take constructive note. This idea has gained traction with recent budget cuts in the department. It has informed parliament that its mandate of rehabilitation might be affected negatively because many posts in prisons will remain vacant.

The Department of Correctional Services has been plagued by high levels of violence in prisons as well as a critical shortage of personnel. This is in the context of unsustainable rates of re-offending and little rehabilitation. It's a circular problem.

One way to break the cycles that return offenders to prison is through the way society treats ex-offenders, providing them with basic human needs such as employment.

A culture of shaming

John Braithwaite, one of the West's most cited criminologists, noted that different cultures have different ways to shame people who have been in prison. In societies like the US and South Africa, these people are often labelled and stigmatised.

They are pushed to the margins of society, preventing them from settling back into the mainstream and driving them into the arms of criminal sub-cultures. In contrast, cultures such as those found in China in the late 1900s and in Japan have tended to encourage reintegration into society. They have done this by highlighting what the former criminals have in common with other people – a shared ethical perspective.

When it comes to prison management, appointing ex-offenders as prison wardens not only provides the formerly incarcerated with a livelihood. It also provides the incarcerated population with positive role models with whom they share experiences and a common life trajectory. This represents an invaluable point of departure for integrative, constructive reprimand.

I've argued in a recent paper that South Africa should consider implementing this fruitful international approach, among others.

Evidence from other countries

In the US, 30 states have begun to employ model ex-offenders after their release from prison. The evidence from China and a great number of US states is that it works, according to reports like this one by the Marshall Project:

States do not necessarily track how many (ex-offenders) they have brought aboard. But a few agencies are beginning to formalise programmes, with the explicit goal of reducing the stigma that can follow ex-prisoners as they look for jobs.

The practice originated in China after the communist takeover in 1949 and Mao's famous injunction that 95% of all offenders could be successfully remoulded into productive, law-abiding citizens. Scholars have described it as resting on “the idea of ganhua (face) which necessitates a cadre-model to emulate”. To enable a shared ethical perspective, re-integrative shaming demands that the reprimand must originate from a person whom the detainee holds in high regard: the cadre model.

US prison authorities have explained the rationale for the warden initiative :

We knew that as we were going out every day talking to the business community and asking them to hire our parolees, it would be hypocritical if we wouldn't hire them ourselves.

When it comes to ex-offenders, South Africa has a harsh stigmatising shaming culture. This means there are high levels of stigma, discrimination and marginalisation following ex-offenders after their release from prison. Earlier research has even called for this phenomenon to be recognised as a hate crime. The country also has unsustainable crime and recidivism rates.

Read more: It's hard to leave a Cape Town gang. But these men's stories show that it's possible

My research indicates that the country could benefit in three important ways from employing ex-offenders in prisons.

Firstly, international experience has shown that appointing model ex-offenders as prison wardens has led to high-performance service delivery. This is measured by the quality of offender-prisoner relationships, among other indicators. Understanding where other offenders come from creates beneficial feedback loops. Serving offenders are more inclined to respect and listen to model ex-offender wardens because they are thought of as “insiders” whose experience helps them understand the pain and challenges of prisoners.

Secondly, the high levels of violence and discontent in South African prisons could be affected positively by model offenders guiding inmates. The international experience suggests this to be the case.

Thirdly, the greatest challenge to ex-offenders is a lack of employment opportunities , especially in a stigmatising climate and after an economically devastating pandemic. This job would give model ex-offenders a chance of a livelihood, an opportunity for which – provided they comply with the requirements – they are eminently well suited.

South Africa's Department of Correctional Services would do well to consider the international experience when it comes to employing ex-offenders as wardens. A trial run is now called for.

Casper Lӧtter does not work for, consult, own shares in or receive funding from any company or organization that would benefit from this article, and has disclosed no relevant affiliations beyond their academic appointment.