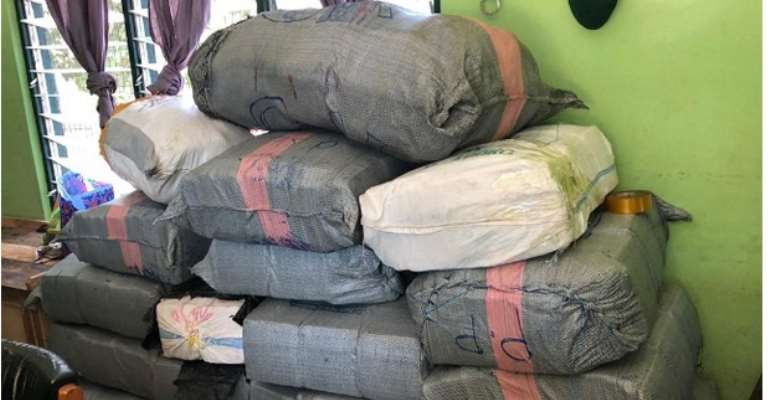 The Honuta Command of the Ghana Immigration Service has intercepted 1,550 parcels of suspected India hemp at the Klave border enclave.

Briefing the Ghana News Agency, Volta Regional Public Relations Officer of GIS, Assistant Inspector Felix Klu-Adjei, said Superintendent Bernard Kojo Nketiah, the Commanding Officer of the Service at the Honuta Border and his men made the arrest upon intelligence.

He said the driver and his accomplices, on the arrival of the Patrol Team, abandoned the goods and a Toyota Mini Bus with registration number GG 2314-20.

He said a search in the bush, revealed some 19 big sacks, which subsequent investigation by the Ghana Immigration (GIS), Police, Customs Division of the Ghana Revenue Authority (GRA), Narcotics Control Board (NACOB) and the National Intelligence Bureau (NIB), showed 1,550 compressed parcels of Indian hemp.

Deputy Commissioner of Immigration (DCI), Peter Claver Nantuo, the Volta Regional Commander of the Ghana Immigration Service, addressing the media, commended the Officer In-charge and the team for a great show of professionalism, high excellence and integrity in foiling the illegal operations of the cross-border syndicates.

He thanked the sister security agencies for their respective efforts and effective collaboration to actualise a common objective.

He praised the District Chief Executive of Ho West, Ernest Victor Apau, the Chiefs and the entire community for rendering their support to the operations of the security agencies.

The confiscated parcels were handed over to the Head of the Narcotics Control Board (NACOB) in the District, Rodger Vanderpuije, in the presence of the District Chief Executive, for further investigation.

The Command is also in the process of handing over the said vehicle to the appropriate authority for onward investigation.