Kate Gyamfua calls for collaboration among women to achieve SDG 5 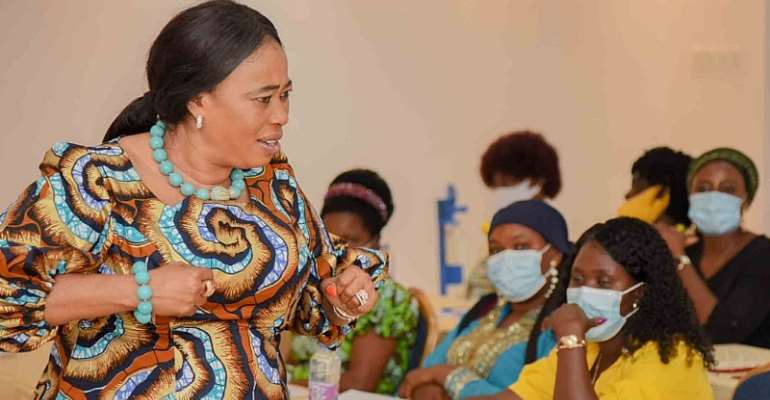 The National Women Organiser of the governing New Patriotic Party has called for effective collaboration among women in leadership.

According to her, to achieve Sustainable Development Goal 5, women must begin to collaborate and not see themselves as competitors. The SDG Goal five talks about gender equality. The goal aims at, among other things, ensuring that at least 30 per cent of top management positions will be occupied by women by 2030.

Speaking at a special orientation and leadership workshop organised for women leaders in smaller political parties, Ms Gyamfua noted that the top has many rooms for women to occupy, and urged them to work together to get there.

She stated that the time had come for women to see themselves as partners in development and not competitors, urging women in various fields to work in a collaborative manner and create space for other women.

She also called on women who have had opportunities to develop themselves so that the opportunities do not slip from their hands. She stated that the world is constantly changing and one’s refusal to grow with the changing speed of the world will make her lose out.

She therefore asked them to learn new things daily, take advantage of available opportunities and not allow themselves to be overtaken by the changing spate of things.

The women were trained on party mobilisation and the role of women in effective political organisation. They also received training in effective communication strategies, rallying support for women, management of ladies’ groups, among others.

The one-day workshop brought on board resource persons with diverse backgrounds to train the women.

The resource persons also encouraged the women to foster unity among themselves.

Participants at the workshop expressed appreciation to Ms Gyamfua for organising the event. They noted that the training had come at the right time, and would help them in their line of duty.