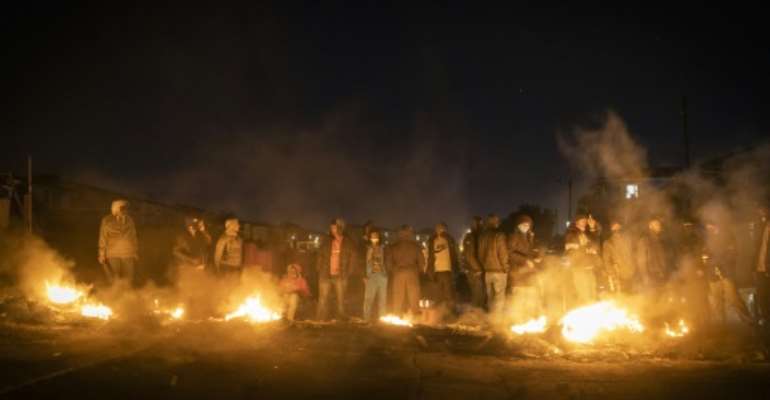 The unrest, the worst in post-apartheid South Africa, erupted a week ago. By GUILLEM SARTORIO (AFP)

South African President Cyril Ramaphosa on Friday alleged that deadly violence and looting that have shaken the country over the past week were planned, as he arrived in the epicentre of the unrest.

"It is quite clear that all these incidents of unrest and looting were instigated, there were people who planned it and coordinated it," Ramaphosa said.

"We are going after them, we have identified a good number of them and, we will not allow anarchy and mayhem to just unfold in our country," he told reporters.

Shopping malls and warehouses have been ransacked in two provinces, stoking fears of shortages and inflicting a devastating blow to the economy. At least 117 people have died, some shot and others killed in looting stampedes.

Ramaphosa's visit to KwaZulu-Natal (KZN) province was his first on the ground since the unrest -- the worst in post-apartheid South Africa -- erupted in the southeastern province before spreading to Johannesburg.

Protests broke out on July 9, a day after ex-president Jacob Zuma, who wields support among the poor and loyalists in the ruling African National Congress (ANC), began a 15-month jail term for snubbing a corruption investigation.

The protests quickly turned into looting as crowds pillaged shops and storehouses, hauling away goods as police stood by, seemingly powerless to act.

The government said on Thursday that one of the suspected instigators had been arrested and 11 were under surveillance.

Ramaphosa has expressed fears of a disruption to supply chains including energy, food and the fight against the Covid-19 pandemic. By PETER NICHOLLS (POOL/AFP/File)

Ramaphosa will "undertake an oversight visit (in KZN) to assess the impact of recent public violence and the deployment of security forces," his office said earlier.

On Wednesday, the government called out around 25,000 troops to tackle the emergency -- 10 times the number that it initially deployed and equivalent to about a third of the country's active military personnel.

Defence, security and police ministers and the top army brass went to KZN on Wednesday to assess the situation and oversee the expanded deployment of security forces there.

Although relative calm has returned to Johannesburg, the situation in KZN "remains volatile", a minister in Ramaphosa's office, Khumbudzo Ntshavheni, told a news conference on Thursday.

Business Unity South Africa (BUSA), a respected business lobby group, has called on the government to impose a 24-hour curfew to quickly contain the unrest.

"This is an emergency unparalleled in our democratic history and requires the state to take immediate action," it said in a statement on Thursday.

"We believe this must include a strongly enforced curfew in specific areas to clear the streets and allow law enforcement to regain control," it said.

It echoed fears expressed by Ramaphosa of a disruption to supply chains including energy, food and the fight against the Covid-19 pandemic.

Analysts estimate that thousands of businesses have been plundered in what the minister described as "economic sabotage" masterminded by 12 suspects.

One of the alleged instigators has been arrested, while the other 11 are under increased police surveillance, Ntshavheni said.

In all 2,203 people have been arrested during the unrest for various offences, including theft.