First and Second Ladies' salary conundrum: Putting the issues in their rightful perspective 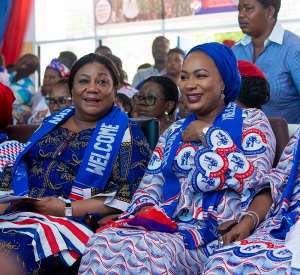 The 21st century woman is intelligent, hardworking and loves to be independent from over reliance on the husband for her basic needs. This drive for economic and social independence propels her to engage in viable economic activity in this pursuit.

For gender parity sake, one could not be wrong to interface the discussion of the First and Second Ladies' proposed salary with the President and Vice President.

It does appear that marrying a president or a vice render such female spouses 'house wives' who do absolutely nothing notwithstanding the fact that they may possess exceptional knowledge or skills that could be harnessed for the the benefit of themselves in particular and the state in general.

The essence of the above article, I believe, is to avoid conflict of interest that could arise from awarding and winning of contracts and many others should president or the vice begin to enter into the realms of profit making enterprise.

However, it is important to note that the critics of this proposal could not have been misogynist or merely opposing it for some ulterior motives. Even though some may do so for political conveniece, the disenchantment and disillusionment among people in several sphere of life is frightening.

This proposal has come at a time there is 4 per cent proposed increment in public workers' salary this year. NABCO beneficiaries are yet to be paid since March, Youth in Afforestation too are wallowing in abject poverty due to inexplicable delays and also reduction, in some cases, in the payment of their monthly stipends just to mention a few.

Therefore, the idea of paying the First and Second Ladies is not really bad but it raises a very serious concern as to where and what the government's scale of preferences are and also whether the New Patriotic Party is fed up of contesting elections again in the near future.

Hence intentionally bringing forth issues that rather infuriate the already angered youths.