The impact of climate change on crop farming: The Ghanaian traditional farming season needs a review 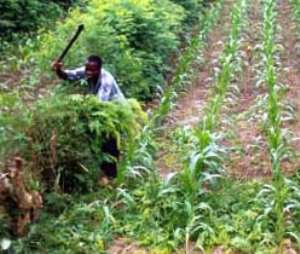 The Ghanaian traditional farming season is one the exemplifies rain-fed agriculture and depends on the rainfall as an important avenue for natural irrigation.

Apart from established rainfall distribution pattern highlighted above, there used to be an extensive drizzling in the months of June and July which popularly became known as June-July otherwise referred to as 'feefee' in Twi which could drizzle for so many days and help the maturation of crops of all kinds.

The Ghanaian traditional farming season therefore hinges on the rainfall distribution pattern which means the success of crop yields, the quest for a bumper harvest and its inextricable link to availability of food depends largely on the quantity of rain droplets a given year experiences.

My grandmother of blessed memory, Maame Ama Duku would prepare her farm land between February and March expecting the rains to set in from April for her to start planting her yam and her expectations were always met mostly in each of those years.

However, the streak of drizzling we used to experience in the months of June and July seems to have become what we now experience in September and October where greater parts of the Southern belt appear to experience drizzling, an evidence of a substantial extension of about two months owing to the debilitating effect of climate change.

Another evidence on why our traditional farming season needs a review is the delays in when the rain sets in at the start of the farming season which used to be in April but our recent past experiences have made all of us become witnesses of how rainfall largely eludes the month of April in our recent past.

What this means to our farmers is that, if they are to get more rain water for their crops to grow well, have a bumper harvest in order to benefit from the sweat of their toil, that traditional farming calendar of Maame Ama Duku of blessed memory needs an extension of, at least, a month.