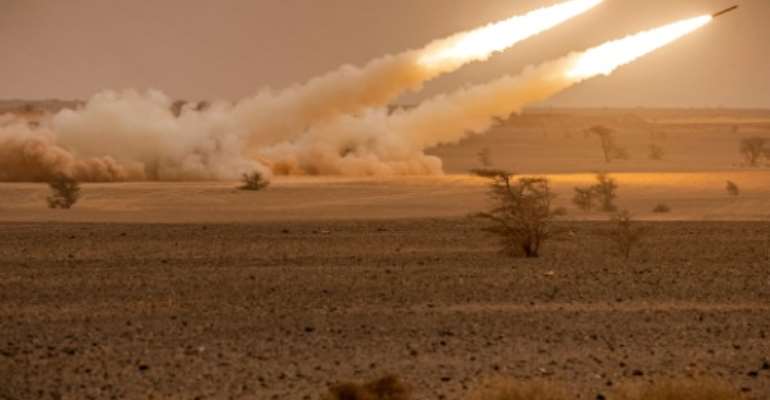 US-led forces are carrying out war games near the disputed region of Western Sahara, in exercises jointly organised with Morocco and touted by US Africa Command as its largest.

More than 7,000 personnel from nine countries and NATO are taking part in the exercises codenamed "African Lion", which kicked off on June 8, according to US Africa Command (Africom).

The manoeuvres, due to conclude on Friday, have seen rockets fired near Western Sahara, navy boats patrol off the coast of Spain's Canary Islands and air forces conduct training exercises.

"African Lion is US Africa Command's largest exercise," Africom said on its website, adding "the training is focused on enhancing readiness for US and partner nation forces."

A Member of the US Navy checks the Moroccan flag on the US navy's ship "Hershel Woody Williams" during the "African Lion" military exercise, on June 11, 2021 in the Moroccan city of Agadir. By FADEL SENNA (AFP)

Moroccan Prime Minister Saad-Eddine El Othmani said in a tweet ahead of the exercises that the event "marks the consecration of American recognition of the Moroccan Sahara".

But the US take on the exercises differed.

"Exercise locations are spread mainly across Morocco, from Kenitra Air Base in the north to Tan Tan and Guerir Labouhi training complex in the south," Africom said in a statement.

In the past days, AFP correspondents have seen exercises, including parachute jump training and rocket fire, taking place in the desert on the edges of Western Sahara.

The manoeuvres were staged some 50 kilometres (30 miles) from the Algerian desert town of Tindouf, where the separatist Polisario Front has a base.

US army soldiers unload items off of a humvee (High Mobility Multipurpose Wheeled Vehicle or HMMWV) in the Grier Labouihi region in southeastern Morocco on June 9, 2021 during the "African Lion" military exercise. By FADEL SENNA (AFP)

The Polisario Front took up arms to demand independence, proclaiming the Sahrawi Arab Democratic Republic (SADR) in 1976 and fighting a 16-year war with Morocco.

Morocco now controls 80 percent of the territory, while the rest is held by the Polisario Front.

Rabat has offered Western Sahara autonomy, but maintains that the territory is a sovereign part of the kingdom.

Morocco's armed forces, which usually keep a low profile, have praised the "perfect conditions" under which the joint exercises are taking place.

Moroccan Air Force F-16 fighter jets land at an airbase in Ben Guerir, about 58 kilometres north of Marrakesh, during the "African Lion" military exercise on June 14, 2021. By FADEL SENNA (AFP)

And in recent days pictures, videos and statements have been posted on the unofficial Facebook page of the Far-Maroc (armed forces) of the military games.

In one video, US Major General Michael J. Turley is heard saying that Morocco has "one of the most modern armies and air forces and navies within the world."

Countries taking part in the exercises include Tunisia and Senegal, as well as Britain and Italy.