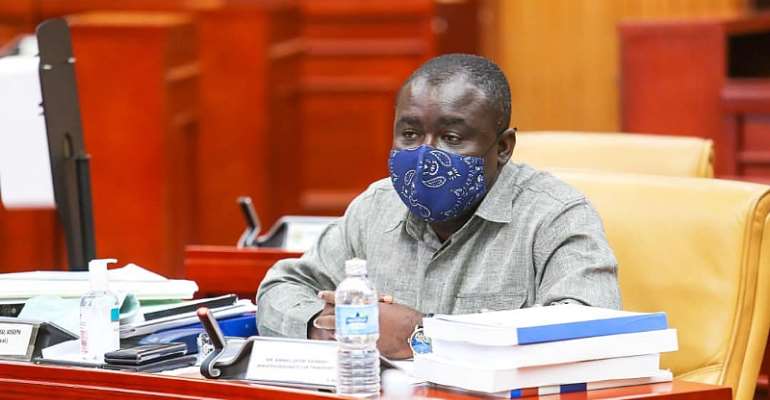 Minister for Transport, Mr. Kwaku Asiamah, has disclosed that an amount of $17.3 million was realized between September and December 2020 from COVID-19 testing at the Kotoka International Airport.

Out of this amount, $16.2 million was retained by Frontiers Health Services, while the Ghana Airport Company received $1.1 million.

The Transport Minister made this known on Thursday, June 10, 2021 in Parliament, after the Minority Leader, Haruna Iddrisu requested details about the proceeds from the COVID-19 testing exercise at the Kotoka International Airport.

The Minister also explained that the contract between the Ghana Airport Company and Frontiers Health Services stipulated a ratio of 10 to 140 dollars out of the $150 testing fee.

He also added that, per the concession agreement, Frontiers Healthcare Services paid $10 to the Airport Company as royalties.

“Mr. Speaker, the concession agreement between the Ghana Airport Company Limited and the Frontiers Healthcare Services for the conduct of COVID-19 testing at KIA started on the 4th of September 2020. The measure was taken to limit the importation of the disease into the country through KIA, which is the foremost entry point by air passengers. The strategy was to test and isolate the infected persons for treatment at various treatment centres. Per the concession agreement, Ghana Airport Company was supposed to receive $10 per test conducted, and Frontiers Healthcare was to keep the rest as their service charge and the total conduct per test was $150.”

“Mr. Speaker between September and December 2020, the total amount realised from the COVID-19 testing at the KIA was $17,590,500. So as per the concession agreement, Frontiers Healthcare Services retained $16,202,200 for its services between the stated period. The Ghana Airport Company Limited on the other hand received $1,167,300 for the same period as royalties accruing from COVID-19 testing. During the period under consideration, a total number of 117,187 came through KIA, out of this number, 115,730 paid for the testing, while 1,157 passengers consisting of children between the ages of 5-12 were exempted from paying for the testing.”

About the Frontiers Healthcare Services contract

Ghana's procurement law allows for emergency procurement and donations to be undertaken in the event of a natural disaster or epidemic, among other things, subject to the Public Procurement Board's approval, in accordance with Act 663, Section 40.

The government engaged Frontiers Healthcare Solution Services Limited to conduct the rapid COVID-19 tests following the reopening of the airport to international passenger flights in September 2020.

The Minority wing in Parliament had raised red flags about possible procurement breaches and demanded documents to ascertain if due diligence was done.

The company was at a point said to be operating whilst unlicensed.