Galamsey fight: No excavator is worth more than our water bodies, forests – NPP Germany 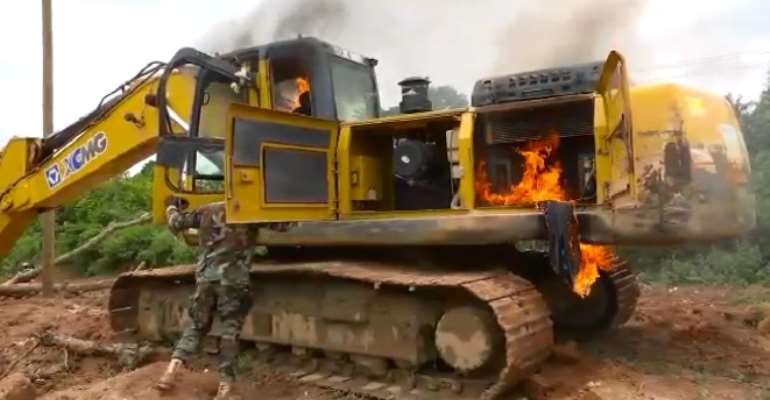 The group said no excavator is worth more than the country’s water bodies and forests.

In the last few months, the government through Operation Halt has intensified the fight against illegal mining.

Soldiers and Police officers who have been working under Operation Halt patrol illegal mining sites seized mining equipment including excavators and burnt them.

In the midst of the condemnation to the latest approach by H.E Akufo-Addo in the burning of excavators, NPP German has released a statement to back the President.

According to the group, the burning of excavators is necessary because excavators are not worth more than the country’s water bodies that have suffered due to the activities of illegal miners.

“Many in the media are condemning the burning of excavators. They are proposing other alternatives. But the bottom line is that no excavator is worth more than our water bodies and our forests,” part of a press release from NPP Germany signed by Communications Director Nana Osei Boateng reads.

The NPP Germany says they pray God guides President Akufo-Addo to the finish line in the war he has started against illegal mining.

Below is the press release from NPP Germany:

Mining has featured in the economics of our nation’s commodity market even before Ghana gained independence. It has indeed been a fulcrum for development for the nation and many other individuals who traded in our natural stones. We have such a treasure to fall on and likewise many other natural treasures.

The effects of mining indiscriminately in Ghana has for some time now become unbearable. Illegal miners which comprises both foreigners and indigenous people have resorted to raping our lands to enrich themselves and while doing this, destroy our vegetations, farms and have touched the soles of almost every water body in the country. From colourless to coffee brownies, our waters are no more human-friendly.

In an attempt to stop this creeping poignant story, Government has ordered all illegal miners to evacuate from their sites and remove all machinery from sites else excavators will be burnt alongside all machinery.

Recent alarming stories about 13 illegal miners in Ghana who are assumed to be dead under the pit following a collapse of the mining pit are not the ones we desire. These young ones could have been alive by now and contributing their quota to the nation, their families and themselves rather than wasting it on such a costly expedition.

Many in the media are condemning the burning of excavators. They are proposing other alternatives. But the bottom line is that no excavator is worth more than our water bodies and our forests. We can tell how much an excavator costs but how much is one river in Ghana?

We can tell how much an excavator cost and again I ask how much is the soul of the thirteen youth gone under the pit.

The President’s declaration of war against illegal mining is fully supported by the nation and the operation shall go on unabated. Detractors are as usual trying their best to sway the minds of many on the military’s action of burning the machinery of these illegal members of our community, that in itself is a matter of good over evil on the part of the detractors which will go nowhere.

May God guide the President to the finish line in the war he has began.

Long live Ghana, the President and the NPP.