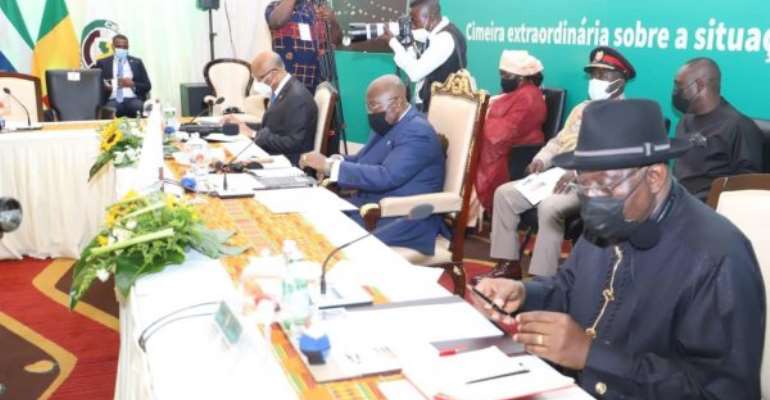 ECOWAS Chairman, President Akufo-Addo of Ghana Sunday reiterated the continuous commitment of the regional bloc to the peaceful resolution on the crisis in Mali.

Thus, he has urged heads of state of government in the region to remain resolute in supporting the people of Mali to find a lasting solution that would restore democracy and stability in that country.

Speaking at the opening of a day's Extraordinary Meeting of the ECOWAS Authority of Heads of State and Government on Mali's political crisis convened in Accra, President Akufo-Addo said the recent happenings in Mali heightened anxiety levels in the region and “shaking the hope of a peaceful and successful transition to a democratic government in Mali.”

He said the sudden dissolution by the President of the Transition of the Mali's Government, headed by Prime Minister Moctar Ouane, on May 14 2021, and the re-appointment of the Prime Minister by the President of the Transition, with instructions to form a new, broad-based government, generated considerable tension between various groups, particularly the military, as the former Ministers for Defence and Security were not re-appointed in the new government announced on May 24, 2021.

“It is unfortunate that this dissolution of the Transitional Government occurred just a few days after the visit of the Mediator, His Excellency Goodluck Jonathan, who was not informed by the Transitional Authorities of this development.”

The ECOWAS Chairman said when the President and Prime Minister of the Transitional Government were held in custody by the military on May 24, 2021 after the announcement of the new government, he asked the Mediator to lead a high-level mission to Mali.

The delegation, which included the Chair of the ECOWAS Council of Ministers, and the President of the Commission held consultations with Colonel Assimi Goita, Vice President of the Transition Government, on the situation at hand.

They asked Goita to consider the most appropriate exit strategy to the crisis, and demanded the immediate and unconditional release of the President and Prime Minister of the Transition and other detainees.

President Akufo-Addo said the delegation met with Bah N'Daw, President of the Transition and Prime Minister Moctar Ouane on Wednesday May 26, 2021, who informed them that they had tendered their resignation.

The pair were later released from detention. And other detainees, according to the military, have also been released.

The Accra meeting, which is being attended by 10 Heads of State, is intended to take consequential decisions on the recent happenings in Mali, to bring normalcy and stability to the West African nation.

After the military takeover on 18th August 2020 in Mali, which led to the resignation of President Ibrahim Boubacar Keita, the ECOWAS Authority called for the establishment of a civilian-led transition for a period of 18 months to allow for elections.