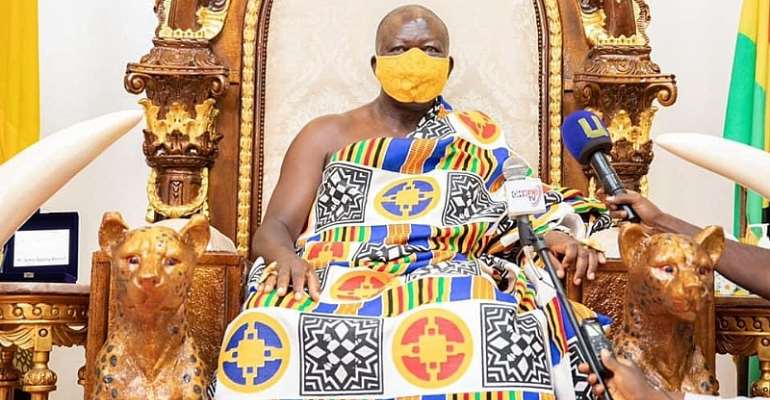 Asantehene Otumfuo Osei Tutu II is urging government to ensure greater involvement of chiefs in the fight against illegal mining.

The Asantehene says the seeming neglect of chiefs in the fight may have resulted in its failure hence the need to do things differently.

Speaking at the Manhyia Palace after some officials of the Minerals Commissions called on him, the Asantehene says chiefs must be made to play a role in the fight against galamsey.

He said chiefs must also be involved in the process of issuance of mining permits, adding that the failure to get chiefs involved in such processes, forces chiefs to get involved in the illegal mining themselves hence jeopardizing the fight.

“The constitution even says all minerals are vested to the president, but we know that the gold is vested in the soil and the local chief is in charge of the soil. A stranger can be given a permit to mine on the chief’s land but the maps and licence for mining are given in Accra. Because the chiefs are not involved, they also join in the galamsey. If the chief is involved in the process, this will not happen,” he said.

Illegal mining locally referred to as 'galamsey', has, over the past few years, dominated national conversations following a major campaign by Citi FM highlighting the devastating effects of the practice.

In 2017, Nana Akufo-Addo declared that he was prepared to put his presidency on the line in the fight against galamsey.

His declaration was amidst new measures such as the deployment of police and military personnel to arrest illegal miners across the country and the introduction of a community mining programme aimed at regulating small-scale mining in communities in an environmentally sustainable manner.

Recently, there have been complaints that the water bodies that were regaining their natural state at the height of the fight against galamsey are becoming polluted again due to the increasing activities of illegal miners in various parts of the country.

President Akufo-Addo again made public statements on the development, saying that there is a need for an open discussion on the subject.

The government, through the Ministry for Lands and Natural Resources, subsequently held a two-day National Consultative Dialogue on Small-Scale Mining that, among other things, urged the government to firmly enforce the country's laws on mining.

As a result of that dialogue, the Lands Minister directed all persons prospecting or carrying out reconnaissance activities in forest reserves to cease within seven days.

The move is said to be one of many to be rolled out as part of efforts to deal with illegal small-scale mining in Ghana.