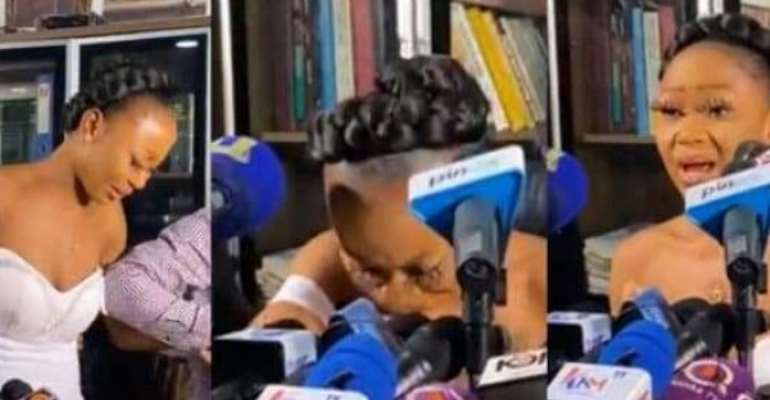 Actress Rosemond Alade Brown, aka, Akuapem Poloo, has appealed to the colleague celebrities and the youth in general to desist from posting pictures depicting nudity and indecent behaviour, while expressing remorse about her own actions.

Poloo, who was serving a 90-day jail term for splashing nude pictures she took with her seven year old son on Instagram, was last Wednesday granted bail by an Accra High Court,

pending an appeal against her sentencing.

The actress, at a press conference on Saturday, said she did not know that her actions would lead her to jail.

It was important, she said, that our cultural values, which shunned obscenity and indecent exposure would be respected by the youth, she said, pledging to champion the campaign.

Amid sobs, Poloo expressed gratitude to her family, fans and all those who stood by her during her prosecution.

"It's God's grace that I am here today because I should have been in jail by now because the 90 days is not yet due.

"First and foremost, I want to thank the Almighty God who has been kind and merciful to me...I say a big thank you, President of the Republic, Nana Addo Dankwa Akufo-Addo, for receiving petitions from well-meaning Ghanaians to intervene in my situation and bringing in the Attorney-General to assist,” she said.

Poloo was also thankful to Ghanaian and Nigerian celebrities who rallied behind the hash tag, “Free Akuapem Poloo”, appealing for her freedom.

On Friday, April 16, this year, an Accra Circuit Court, sentenced Poloo, who had pleaded guilty, on all the three counts of charges against her.

Poloo was charged with the publication of obscene materials, engaging in domestic violence namely, a conduct that in any way undermines another person's privacy or integrity.

The Court presided over by Mrs Christina Cann, delivering the sentence, noted that apart from canker, such as rape and defilement, the act of posting obscene pictures was becoming rampant in the country.

The Court said Poloo did not respect the right of her son in posting the pictures, and that it would hand down a sentence that would deter other like-minded persons.

However, on Wednesday, April 21, Poloo was admitted to bail after a High Court upheld her application for bail.

The High Court ordered Poloo to report to the case investigator every two weeks.

She is also to deposit her passport with the High Court Registry.

The Court, presided over by Mrs. Justice Ruby Aryeetey, ordered Poloo to seek the permission of the Court any time she wanted to travel outside the country.