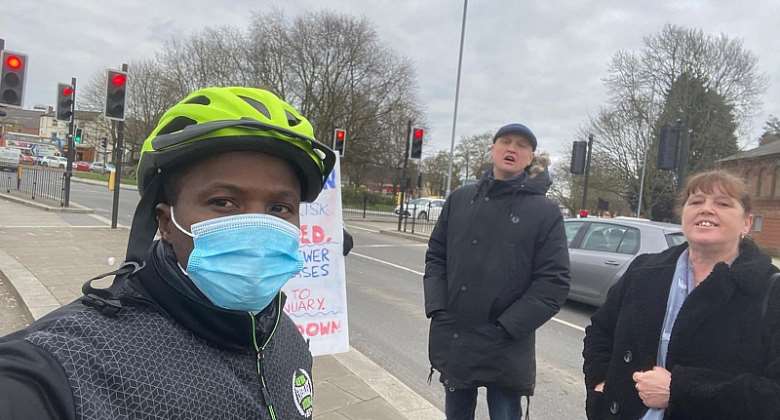 Some members of a group describing itself as “Stop New Normal Movement” on Friday, March 5, at Northampton town centre were seen holding placards with inscriptions calling on the UK Government to end the lockdown immediately.

The group protested across the country last year with the aim of pushing the government to end the restriction imposed due to the pandemic but their campaigns have seemingly not produced the intended results as the lockdown goes on.

In a one-on-one video interview with some members of the group, they revealed to journalist Attractive Mustapha Nii Okai Inusah that, they believed that 18-million people were being put at risk though vaccinated.

They continued urging everyone to say no to the vaccine, say no to the mask-wearing because to them Covid-19 is not real, and putting on face masks causes more harm than good.

When asked why they were not putting on the nose mask, the group answered that it was not a law but rather a guideline but they did not believe in it so they were protesting and campaigning against it.

''We are trying to get everyone to take their masks off because wearing it can attract a lot of diseases''.

They ended by saying that they were a movement and their main intention was to fight against the UK Government’s Covid-19 policies which they believed caused illness and death rather than saving lives as people were made to believe.

‘‘We are #StopNewNormal and #OurMovement. We are a political movement fighting against the government's Covid policies which cause illness and death - and fighting for action to cut claimed virus illness and SAVE LIVES‘‘.

The Key Points in the story

Gov’t will build houses for displaced victims of Appiatse ex...
19 minutes ago

‘My courtroom is as hot as oven’ – Justice Kwoffie laments f...
19 minutes ago