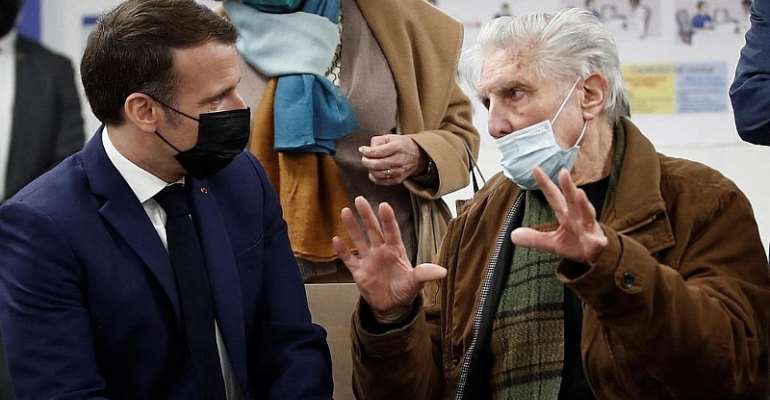 President Emmanuel Macron has given the French a glimmer of hope by suggesting that restrictive measures to rein in Covid-19 infections, in particular the 6pm national curfew, could begin to lift in four to six weeks. It's the first time the president has given a hint of a time frame for an easing of restrictions.

Macron spoke during a visit to Stains, in the Seine-Saint-Denis region of greater Paris, a poor area which has been hit hard during the epidemic. He met young people in training programmes and senior citizens coming to get vaccinated, Le Parisien reported.

During the visit, a young man asked Macron if he couldn't push back the start of curfew by an hour, saying the 6pm stay-at-home rule was “hard”.

"We have to hold out for a few more weeks...four to six weeks," Macron replied.

That's the time frame eyed by the government for the effects of its vaccination strategy to begin to show.

"In four to six weeks, we will have vaccinated more French people, which will have an impact on the evolution of the epidemic," the presidency said later.

Why are France's elderly not queuing up to get the Covid vaccine?

Later on Monday, the president went to a Covid-19 vaccination centre in Bobigny – his first visit since the deployment began, and faced similar questions about the curfew.

In the queue for vulnerable and over-75-year-olds, one man told Macron that people "need to breathe", especially with the mild end of winter weather in recent days, Le Parisien reported.

“I promise you we'll do whatever we can," Macron told him. "What you say is true. It's what a lot of French people feel.”

The man acknowledged that the president had a difficult job to manage the government response to the epidemic.

The president's apparent message of hope comes just after the government imposed a weekend lockdown in Nice and the surrounding French Riviera region and the northern city of Dunkirk to rein in soaring Covid cases.

Twenty other departments, which include the capital Paris, are under heightened surveillance due to high levels of new infections.

At the weekend, France's top public health official Jérôme Salomon hailed the 6pm curfew's efficacy, saying a new lockdown could be avoided if everyone plays their part.

Several hospitals in western France have decided to slow down their vaccination campaigns because of strong side effects of certain vaccines among healthcare workers.

France's vaccination campaign was slow to take off, with many elderly not keen to get the jab.