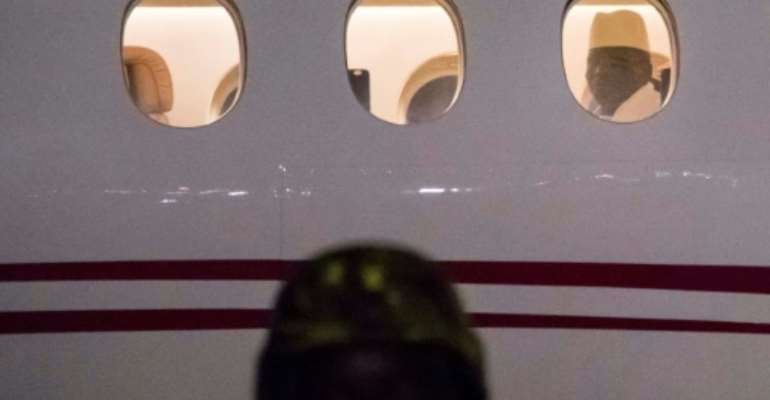 Former president Yaya Jammeh, The Gambia's leader for 22 years, looks through a window from a plane as he leaves the country on January 21, 2017. By STRINGER (AFP)

Witnesses in The Gambia have come forward to offer testimony about the massacre of some 50 migrants in 2005, one of the most notorious atrocities that occurred under ex-president Yahya Jammeh.

The former autocrat ruled the tiny West African state for 22 years before he fled in January 2017 after losing a presidential election to Adama Barrow, a relative unknown.

It has heard testimony about torture, rape, death squads and state-sponsored witch hunts, among other alleged abuses, since hearings began in 2019.

But on Wednesday the commission began probing one of the most infamous episodes of Jammeh's rule: the alleged execution of around 50 Europe-bound migrants who were taken for mercenaries in 2005.

Hearings dedicated to the massacre are expected to last several weeks, and will feature testimony from the sole known survivor, a Ghanaian national named Martin Kyere.

Secka added that he had misgivings that they were mercenaries, but that his concerns were "brushed aside".

A banner reads "Never Again" as a police band performs for the country's Truth, Reconciliation and Reparation Commission. By Claire BARGELES (AFP)

"The response was not very pleasant," the former intelligence officer said, explaining that one of the security-forces men was wearing a sleeveless robe adorned with traditional charms, or 'jujus'.

In a statement this week, Human Rights Watch (HRW) said the massacre constituted the "largest loss of life" under Jammeh.

Details about the massacre are unclear, however.

Map of Gambia. By afp (AFP)

Human Rights Watch put the number of victims at over 50, with about 44 thought to be Ghanaians, as well as other migrants who were Senegalese, Togolese and Ivorian.

The victims reportedly travelled by boat from the seaside Senegalese city of Saly, south of the capital Dakar, and arrived in the Gambian town of Barra July 22, 2005, according to the NGO, before they were apprehended.

Soldiers then transported the migrants to the capital Banjul and split them into smaller groups.

On the evening of July 23, soldiers allegedly killed eight of the migrants with axes and machetes on a beach south of Banjul, the NGO said.

About a week later the remaining captives were allegedly taken near to Jammeh's birth village of Kanilai, on the southern border with Senegal, and shot.

Kyere escaped by leaping from a pick-up truck soldiers used to transport the migrants and staggering through a forest.

Secka, the intelligence officer, shocked the truth panel on Thursday when he produced a list of the names of the migrants.

"Manna from heaven," said lead counsel Essa Faal, who had been questioning the ex-spy, in surprise.

Secka explained that he had kept the list because he believed that there would one day be an investigation into the affair.

"My faith in my religion made me believe that some day, something like this will happen," he said, referring to the truth commission.

There are numerous calls for the former dictator, who fled to Equatorial Guinea, to return to The Gambia to face trial.

However, he retains a significant following in the former British colony of about two million people, and some want his return to active politics.

The TRRC is expect to hold its final hearings this year.