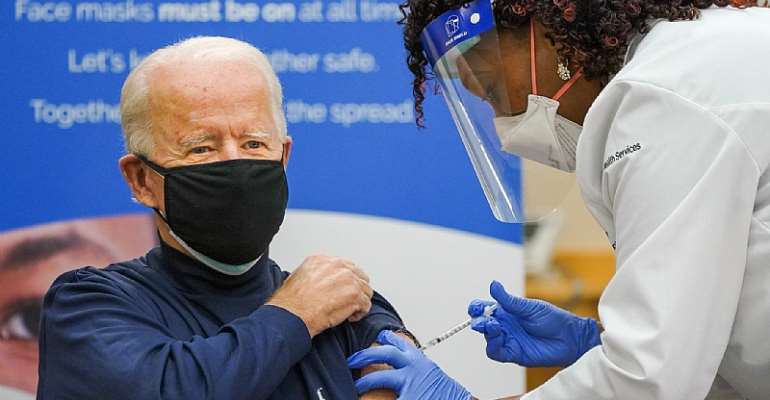 On behalf of the Interim National Strategic Planning Committee, members, supporters, and sympathizers of the People’s Democratic League (PDL), and on my behalf as the Founder, Leader and National Chairman, I want to grab this opportunity to welcome His Excellency Joe Biden and express our profound and heartfelt congratulations on the historic occasion of his inauguration, on 20th January 2021 as the 46th legitimate and democratically-elected President of the United States of America.

At a time when the coronavirus pandemic and its negative economic effects have hit African countries hard, including Sierra Leone, it is most necessary to resist any policies that are at variance with democratic ethos. This is why we condemned the 6th January 2021 invasion of Washington DC as an attempt to undermine American democracy and democratic values.

We join with other African Organisations, Political Parties, Movements, and Civil Society Groups that share a vocation to be peacemakers and a commitment to promote and defend democracy and human rights. This calling leads us to encourage the new administration in Washington, to demonstrate global leadership by pushing for the entrenchment of democracy and democratic good governance in Africa.

We call also on the US government to ensure that the human rights of citizens, including the rights to belong to a political party of one’s choice are not impeded by greed, corruption, and political gangsterism. This must not be seen to happen during this global coronavirus when all hands are needed on deck to fight this destructive pandemic.

Having worked so hard to restore peace and democracy in Sierra Leone, after years of brutal one party rule and the ensuing 11-year brutal fratricidal war, the People’s Democratic League (PDL) feels compel to call on the Biden administration in Washington to exert pressure to bear on the Political Parties Registration Commission (PPRC) in Freetown to refrain from trampling upon the human rights and democratic freedoms of the people of Sierra Leone.

That the PPRC is under obligation to respect the provisions of the 1991 multiparty constitution; and owes it a duty to work towards ensuring that justice is done to PDL and its members, who are not foreigners but Sierra Leoneans who must be treated like any other peaceful and law-abiding citizens of Sierra Leone. The issuing of final political party registration certificate to the PDL would be an important step on the path toward consolidating peace and promoting democracy in Sierra Leone.

In keeping with the principles of human rights and democratic freedoms of Sierra Leoneans enshrined in the Sierra Leonean 1991 multiparty constitution, the People’s Democratic League (PDL) supports efforts to promote peace, justice and dignity, without surrendering our hard-won democracy to the whims and caprices of corrupt bureaucracy. We believe that justice to the PDL is a key to advancing multiparty democracy in Sierra Leone.

Trampling on the human rights and democratic freedoms of Sierra Leoneans only further complicates the fight against the corona virus pandemic, in and outside Sierra Leone; we want the sane international community to understand this fact.

Our resolved to join the fight against the corona virus pandemic has been hampered by PPRC’s delay to issue out PDL’s final political party registration certificate. We desire progress and prosperity for Sierra Leoneans everywhere, regardless of immoral considerations, such as tribe, regionalism, gender or socio-economic status. Despite all the challenges, the PDL remains peaceful, calm and will not caved into abandoning its human rights and democratic freedoms in line with the 1991 multiparty constitution.

Further, we appeal to President Julius Maada Bio to immediately create a Constitutional Crisis Prevention Commission (CCPC), with a manifested mandate to check and prevent acts of abuse of the 1991 multiparty constitution. The proposed Constitutional Crisis Prevention Commission (CCPC) should compose of Legal luminaries, rights’ activities, traditional rulers and professional bodies’ drawn from across the country.

It is our firm belief that the creation of the proposed CCPC would be a critical step to forestall the risk of political violence, minimize corruption, reduce poverty and consolidate current peace and democracy. It is in this spirit of forging a stable national body polity that the PDL believes the international community, particularly the Biden administration in Washington has a role to play to ensuring that Africa no longer slides into the pre-1990 years of tyranny, fascist terrorism and brutal dictatorship.

We are therefore deeply concerned by the brutal injustice meted on the PDL since 2016, when the Movement resolved to become a full-fledged political party for Sierra Leone. This signals serious attack on the human rights and democratic freedoms of Sierra Leoneans from across the length and breadth of the country and in the diaspora, who are behind the PDL either as members, supporters or sympathizers.

We are particularly disturbed that these certain institutions that are looked upon to provide leadership by example have fallen prey to epileptic bureaucracy, and by extension abandoned democratic ethos, for a life of opulence and immorality. We fear that this situation, which is not practice in any civilized society, could deteriorate the relationship of trust and confidence that is so crucial for the works of the Political Parties Registration Commission (PPRC) in Freetown.

The People’s Democratic League (PDL) recognizes and appreciates the extensive experience and leadership demonstrated in President Joe Biden’s previous position as Vice-President of the United States, under the Obama administration. We have no doubt that with this versatility of experience and leadership role both at home and abroad, President Biden is poised to provide exemplary leadership to the world, especially in helping to boast democracy and practice of human rights, as well as in sustaining political stability, Peace and Security in Africa.

It is on record that the US President was a key partner of Africa in dismantling the former obnoxious apartheid enclave in South Africa. He was also a strong supporter in the implementation and sustenance of the ECOWAS Early Warning Mechanism (ECOWARN) as well as the implementation of the ECOWAS Conflict Prevention Framework (ECPF). Burying the mistakes of former President Barack Obama in Libya, and, forging and maintaining a relationship with the Biden administration in Washington will go a long way to heal old wounds and once again rekindle hope in Africa.

In line with US democratic values, we urge the Biden administration in Washington to use its good offices to demand justice and fair play in the registration of political parties in Sierra Leone. We ask that the US government demonstrates its commitment to peace, stability and development in Africa.

We look forward to the Biden administration for promoting the existing progressive relationship between Africa and the United States.

We take this opportunity to commend the American people for their patience in the November 2020 electoral process. The PDL is indeed delighted that the impasse emanating from disputes over that election process and results, has come to an end and the rule of law has prevailed. We trust that the American people will unite than ever before in the singular purpose of achieving further prosperity for their country.

Grace, peace and best wishes of good health, happiness and success to President Joe Biden, as he steers the affairs of the United States of America!

For and on behalf of members, supporters and sympathizers of the People’s Democratic League (PDL)