Many old people in Ghana need daily care. How the government can help

By Cati Coe - The Conversation 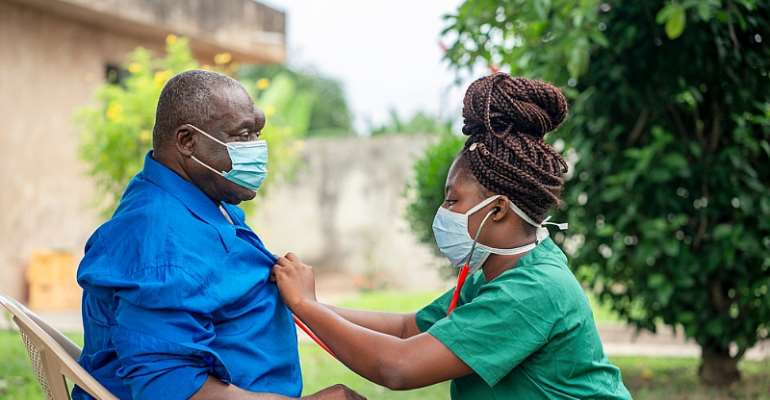 Professional home care for the elderly in Ghana has been ignored. - Source: Kwame Amo/Shutterstock

The world's population is growing older – and that includes African countries, although they remain primarily youthful. Of all the countries in sub-Saharan Africa, Ghana has among the highest proportion of people over the age of 60, namely 7.2% .

This age group expanded from 200,000 to 1.6 million between 1960 and 2010 in Ghana. At the same time, the prevalence of health problems has grown. In a large-scale survey of Ghanaians over the age of 50, 33% reported hypertension, 14% arthritis, 7% diabetes, 6% a cardiovascular condition and 4.9% treatment for stroke.

Disability and frailty from unregulated diabetes, stroke or dementia require long-term, ongoing assistance with daily activities. So it's likely that as Ghana's population ages and chronic diseases become more common, there will be a greater need for long-term care.

The World Health Organisation estimated in 2015 that 50% of those aged 65-75 in Ghana required some assistance with their daily activities, as did 65% of those older than 75.

For the most part, this burden has fallen on kin. In Ghana, adult children are considered responsible for the care of aged parents. But there is an increasing sense, among older adults and their relatives, that kin care is stretched too thin and is inadequate for long-term care.

I have undertaken several studies which show that alternatives exist to give the aged the care they need. But a lot needs to be done to improve and formalise training for paid caregivers. The government can help by regulating elder care services and guiding certification and training.

Middle-class and elite households in Ghana often include extended family members and helpers. There's a cultural stigma attached to moving an older adult into a care facility. Although most families rely on informal networks and extended kin relations to provide care in the home, a small market of home care agencies has developed in Accra since the 1990s. It's been built partly by the growth of remittances from Ghanaians abroad.

These commercial care services are a new source of employment for young women (and some young men) with secondary school education. But they are completely unregulated. While many agency owners operate their businesses with great compassion for the aged, they are undercut by more precarious operations which can offer cheaper services. One thing government could do to ensure high-quality care across agencies is standardise training for care workers and require that agencies hire only trained workers.

My research aimed to document changes in care among older people in Ghana, both in the urban areas where these commercial services were being offered, and in the rural towns of the Eastern and Volta Region, where the greatest concentrations of Ghana's older population lived. For five years, I followed commercial and charitable initiatives, talking to older people, their family members, agency owners and their employees. I also observed a school for carers and followed its graduates.

There have been some attempts to professionalise the care workforce. In 2005, an agency owner worked with the National Vocational and Technical Institute to create a credential for carers. This was aimed at professionalising the occupation. But over a decade, the curriculum came under pressure from private nursing schools. Nursing offered better pay, greater work autonomy and a higher social reputation. The training focus changed from home care to hospital-based work. Instead of being called a certificate in care, it became one of nursing assistance.

In conversations I had with training authorities, it emerged that the Nursing and Midwifery Council felt threatened by the National Vocational and Technical Institute's popular certificate, which was offered at 110 schools across the country, and which about 1,000-1,500 students had received between 2003 and 2015. The council argued that only nurses should provide home care. It created an alternative certificate, similarly preparing students to assist nurses in hospitals.

Students and agencies alike are frustrated, the students by entering a field associated with domestic service and the agencies by employing ill-trained people who want to be nurses.

These problems lead to low-quality care for older patients. The current situation is not meeting the needs of ageing adults, unemployed young people or commercial care services.

Home care agencies should be involved in creating an appropriate curriculum. Caring entails a holistic approach. It comprises social work and psychology, as well as physical caring practices.

Carers have to operate relatively independently in people's homes, unlike nursing assistants who work in hospitals under the direct supervision of nurses. The government agency supervising the carer credential needs to coordinate closely with the sector that will employ graduates. Nurses with an understanding of home care, as well as social workers and geriatricians, should be involved in training and supervising carers. The course should be short, no more than a year, so students can afford it. Denmark has a comprehensive home care training programme , which often serves as a model for other countries.

Government regulation of agencies and appropriate training of carers will produce carers who are proud of their work and whose skills continue to grow. But these reforms will still be limited to those who can afford such services. Many rural and peri-urban poor families face similar needs for long-term care. They will only obtain it if the government of Ghana commits to paying for or subsidising the care of frail, ageing adults.

Cati Coe does not work for, consult, own shares in or receive funding from any company or organisation that would benefit from this article, and has disclosed no relevant affiliations beyond their academic appointment.