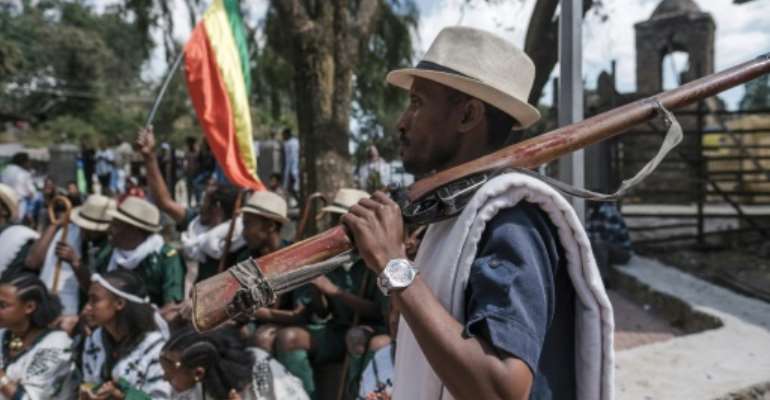 Militiaman Tesfahun Mande strolled through the streets of Gondar yelling chants in praise of Amhara fighters who took on the TPLFÂ . By EDUARDO SOTERAS (AFP)

Outside a centuries-old stone church in the northern Ethiopian city of Gondar, a drama troupe performed skits hailing the military defeat of the former leaders of the country's Tigray region.

As rifle-toting actors danced around chanting actresses, an audience cheered when the troupe denounced the Tigray People's Liberation Front (TPLF) as a band of "traitors".

The performance was part of festivities marking the Orthodox Christian holiday of Epiphany, known as Timkat in Ethiopia, which commemorates Jesus's baptism in the River Jordan.

In a typical year, Timkat in Gondar is a sunny, lighthearted affair, capped by a ceremony at 17th-century stone baths -- built during the time of Emperor Fasilides -- in which thousands of worshippers and tourists dive into holy water.

The event is a main driver of tourism in Gondar, the former seat of Ethiopia's royal empire, and in 2019 it earned a spot on UNESCO's list of Intangible Cultural Heritage of Humanity.

This year, however, is hardly typical for Ethiopia: The country is grappling with the conflict in Tigray as well as persistent ethnic violence in other regions and, most recently, simmering tensions along the border with Sudan. 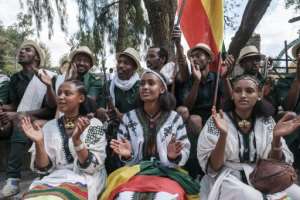 The crises have inspired some officials and ordinary Ethiopians to turn the event into a celebration of military might, using public statements and performances to project strength and issue warnings to would-be enemies.

Even the official slogan of this year's celebration -- "Ethiopia's Rebirth at Gondar's Timkat" -- is a reference to the Tigray conflict, which officials term a "law-enforcement operation".

"It is talking about Ethiopia's renaissance, especially because of what the government is achieving with the law-enforcement operation," Gondar's mayor, Molla Melkamu, said of the slogan.

"It means that for Ethiopians, this is a new beginning."

Prime Minister Abiy Ahmed, winner of the 2019 Nobel Peace Prize, announced the military operations in Tigray in early November, saying they were in response to TPLF-orchestrated attacks on federal army camps.

By the end of the month, federal forces had entered the Tigray capital Mekele and Abiy was declaring victory, though TPLF leaders remain on the run and fighting has continued.

In Gondar, located in the Amhara region south of Tigray, the conflict has spotlighted long-running animosity towards the TPLF, which dominated Ethiopian politics for nearly three decades before Abiy took office in 2018. 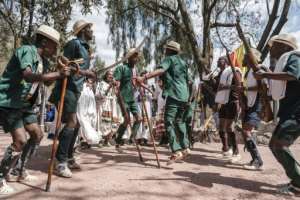 As rifle-toting actors danced around chanting actresses, an audience cheered when the troupe denounced the Tigray People's Liberation Front as a band of 'traitors' . By EDUARDO SOTERAS (AFP)

After the fighting broke out, Gondar resident Tesfahun Mande grabbed a rifle and rushed to the front, determined to help reclaim land that many Amharas, members of Ethiopia's second-largest ethnic group, accuse the TPLF of seizing when they came to power in the early 1990s.

"When we went there, we were very joyful," Tesfahun told AFP, describing his time in battle.

"Even the dead died smiling."

Tesfahun held onto his rifle during Timkat this week, strolling through the streets of Gondar yelling chants in praise of Amhara fighters who took on the TPLF.

A nighttime poetry reading organised in Gondar in the lead-up to Timkat struck a triumphant note, with one man drawing applause for the following lines:

The Tigray offensive was not the only conflict invoked by worshippers during this year's Timkat.

At a five-kilometre fun-run earlier this week, several participants carried signs imploring officials to "pay attention to Metekel", an area of western Ethiopia where hundreds -- including many Amharas -- have died in recent grisly attacks on civilians.

Abiy's government has failed to stem the violence or explain who is behind it. 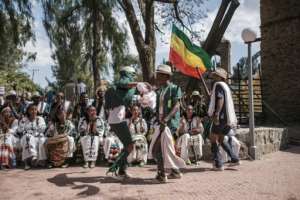 Even the official slogan of this year's celebration - 'Ethiopia's Rebirth at Gondar's Timkat' - is a reference to the Tigray conflict. By EDUARDO SOTERAS (AFP)

But Amhara politicians see it as an attempt to drive ethnic Amharas out of Metekel and are calling for federal military intervention.

Tegenu Guadie, a 26-year-old student from Metekel, spotlighted that appeal during Gondar's main Timkat procession Monday, which saw priests escort cloaked tabots -- replicas of the Ark of the Covenant -- amid a riot of song, dance and prayer.

"The Metekel issue is very worrying. People are chased out of their homes and are being killed," Tegenu said, arguing that the situation called for "military" force.

Emerging in his underwear from his short swim in the holy water, 24-year-old Gondar resident Getenet Mekuant said that was as it should be, stressing he was there "for religion, not politics".

Yet politics and conflict were never far from officials' minds.

"As we celebrate this year's Timkat, we think about those who gave their lives in the law enforcement operation," Amhara regional president Agegnehu Teshager said in remarks delivered from the water's edge.

"We also think," he added, "about those who were killed or chased from their homes because of their ethnic identity."