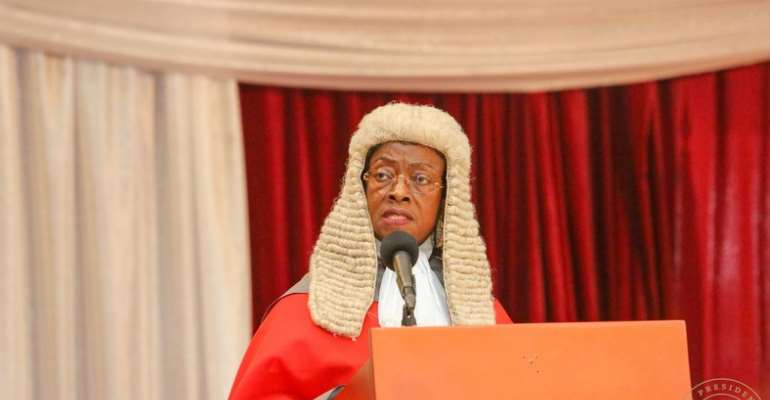 The immediate past Chief Justice of Ghana Sophia Akuffo says Asawase lawmaker Mohammed Muntaka Mubarak has defamed all Supreme Court justices in the country with his bribery allegation.

The NDC lawmaker has claimed a Supreme Court judge made an offer through a phone conversation to a member of the NDC caucus in Parliament to vote for former Speaker Mike Oquaye during the Speakership contest.

He has subsequently insisted he will back the claim with evidence if need be. Professor Oquaye lost the Speakership position to the NDC candidate Alban Bagbin.

Commenting on the development, Madam Akuffo said the allegation upsets her.

“I am upset at the very thought that, that kind of accusation will be made. I don’t like accusations like that. It is like throwing a bucket of dirty water at people and you were aiming at somebody but you just threw it and it dirties everybody.

“There are 17 people you have defamed in that causal manner but you are talking about only one person so there are 16 people who have been wrongly done by,” she told Accra-based Joy FM.

In a statement on the development, the Judicial Service said: The Judiciary has noted with grave concern the remarks of Mohammed- Mubarak Muntaka, Hon. Member of Parliament for Asawase, which have been widely published in the media, alleging that a Justice of the Supreme Court attempted to bribe an NDC female Member of Parliament to vote for Right Hon. Aaron Mike Oquaye, in the election of the Speaker of the 8th Parliament, which took place on 7th January 2021″.

The statement added: “The general public is hereby assured that the Hon. Chief Justice considers this allegation of impropriety a matter of grave import to the integrity of the Judiciary.

“The Hon. Chief Justice is therefore-taking steps to solicit the assistance of Mohammed-Mubarak Muntaka MP, to establish the facts in order that the matter can be dealt with appropriately”.

Ghana may be first to accept LGBTQI in Africa just like demo...
3 minutes ago